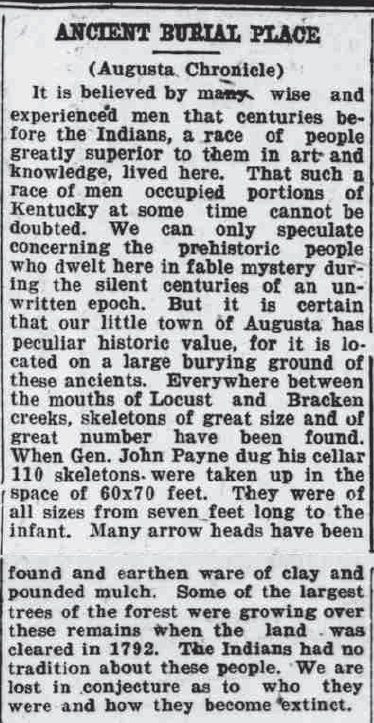 It is believed by many wise and experienced men that centuries before the Indians, a race of people greatly superior to them in art and knowledge, lived here. That such a race of men occupied portions of Kentucky at some time cannot be doubted. We can only speculate concerning the prehistoric people who dwelt here in fable mystery during the silent centuries of an unwritten epoch. But it is certain that out little town of Augusta has peculiar historic value, for it is located on a large burying ground of these ancients. Everwhere between the mouths of Locust and Bracken creeks, skeletons of great size and of great number have been found. When Gen. John Payne dug his cellar 110 skeletons were taken up in the space of 60 x 70 feet. They were of all sizes from seven feet long to the infant. Many arrowheads have been found and earthen ware of clay and pounded mulch. Some of the largest trees of the forest were growing over these remains when the land was cleared in 1792. The Indians had no traditions about these people. We are lost in conjecture as to why they were and how they become extinct.