The county is named for “Ashland”, the home of Senator Henry Clay near Lexington, Kentucky. It was formed in 1846 from parts of Huron, Lorain, Richland and Wayne Counties. 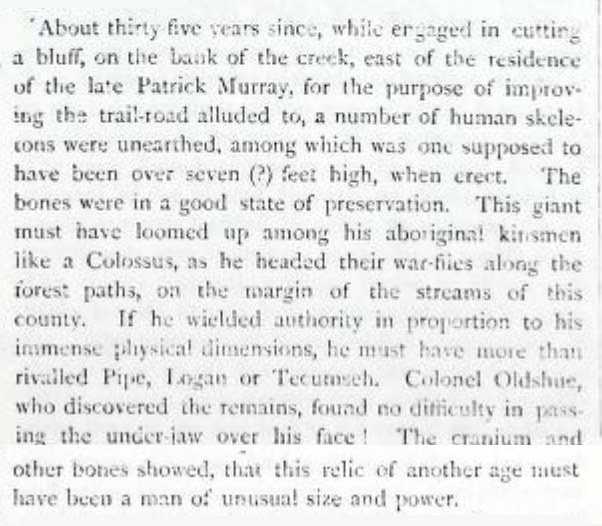 About thirty-five years since, while engaged in cutting a bluff, on the bank of the creek, east of the residence of the late Patrick Murray, for the purpose of improving the trail-road alluded to, a number of human skeletons were unearthed, among one which was supposed to have been over seven feet high, when erect. The bones were in a good state of preservation. This giant must have loomed up among his aboriginal kinsman like a Colossus. 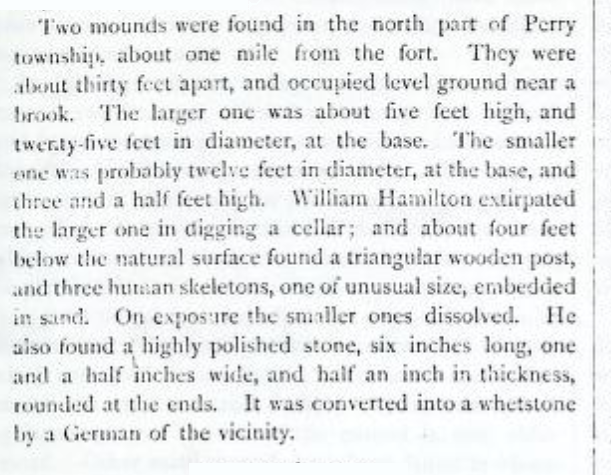 Two mounds were found in the north part of Perry
township, about one mile from the fort. They were
about thirty feet apart, and occupied level ground near a
brook, ‘fhe larger one was about five feet high, and
twernty-five feet in diameter, at the base. The smaller
one was probably twelve feet in diameter, at the base, and
three and a half feet high. William Hamilton extirpated
the larger one in digging a cellar; and about four feet
below the natural surface found a triangular wooden post,
and three human skeletons, one of unusual size, embedded
in sand. On exposure the smaller ones dissolved. He
also found a highly polished stone, six inches long, one
and a half inches wide, and half an inch in thickness,
rounded at the ends. It was converted into a whetstone
by a German of the vicinity.