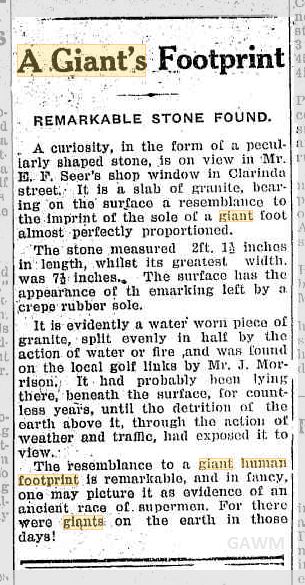 „ A curiosity, in the form of a peculiarly shaped stone, ,is on view in Mr. E. F. Seer’s shop window in Clarinda street. It is  a slab of granite, bearing “on the surface a resemblance to
the imprint of the sole of a giant toot almost perfectly proportioned.
The stone measured 2ft. 1/2 incles in length, whilst its greatest width, was 74’inches.,. The surface has the
appearance of the marking left by a crepe rubber sole.
It is evidently a water worn piece of granite, split evenly in half by the action of water or fire ,and was found on the local golf links by Mr. J. Morrison.  It had probably been lying there, beneath the surface, for count less years, until tho detrition of the earth above it, through the action of weather and traffic, had exposed it to
view.
The resemblance to a giant human footprint remarkable, and in fancy, one may picture it as evidence of an ancient  race of  supermen. For there
were giants , on the earth in those days!