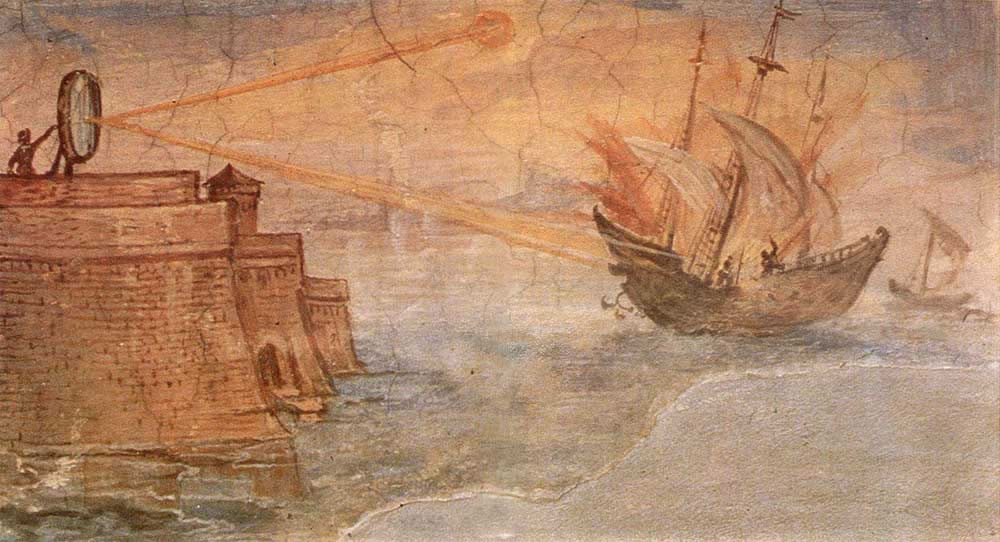 9, 4At last in an incredible manner he [Archimedes] burned up the whole Roman fleet. For by tilting a kind of mirror toward the sun he concentrated the sun’s beam upon it; and owing to the thickness and smoothness of the mirror he ignited the air from this beam and kindled a great flame, the whole of which he directed upon the ships that lay at anchor in the path of the fire, until he consumed them all.

The above passage is from

When Marcellus withdrew them [his ships] a bow-shot, the old man [Archimedes] constructed a kind of hexagonal mirror, and at an interval proportionate to the size of the mirror he set similar small mirrors with four edges, moved by links and by a form of hinge, and made it the centre of the sun’s beams–its noon-tide beam, whether in summer or in mid-winter. Afterwards, when the beams were reflected in the mirror, a fearful kindling of fire was raised in the ships, and at the distance of a bow-shot he turned them into ashes. In this way did the old man prevail over Marcellus with his weapons.

The above passage is from

The Burning mirrors are mentioned by Lucian of Samosata and Galen. Anthemius of Tralles (474-534), the Architect of the Hagia Sophia, tells us that Archimedes used many mirrors. Johannes Zonaras in 1118 says that first Archimedes used the “iron Hand” against the ships and then he burned these with mirrors.

Proclus used a similar method in 514 against the ships of Vitellius. Fire was emitted from the mirrors that looked like a flash. Johannes Tzetzes says that hexagonal mirrors were used. Zonaras and Tzetzes used sources from Cassius Dio and Diodorus Siculus. Girolamo Cardano discussed the possibility of using spherical mirrors for ships in 1.5 km distance. Cardano proposed a mirror with only 1/60 of the total spherical perimeter that still is around 300 m!