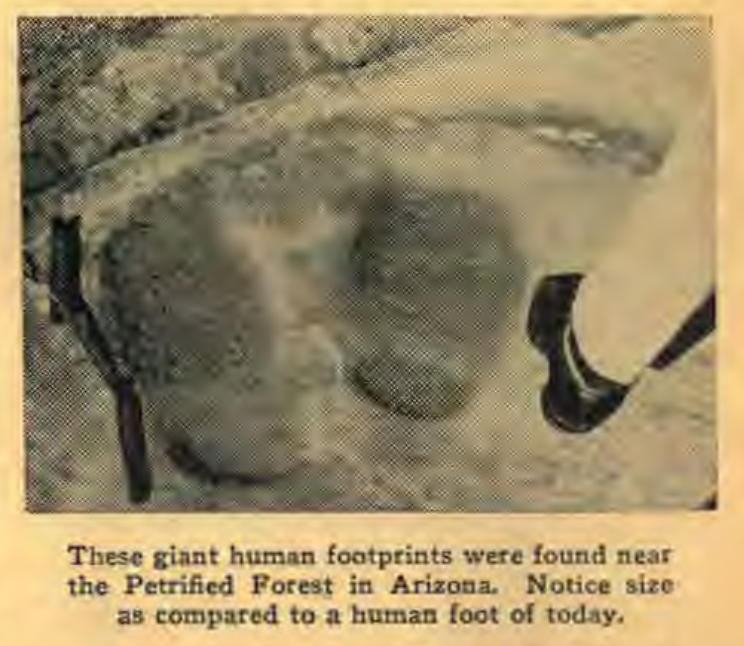 “Recently I found impressions, or tracks, in Moen-kopi (Triassic) sandstone near the Petrified Forest, in Arizona, that were evidently made by the shoes or moccasins of a human giant, probably antediluvian.

These footprints measured from eighteen to twenty inches in length. In the photographs illustrating the find, there will be seen recent carvings of some boy’s initials; but the erosion shows the foot imprints to be very old. The giant was evidently standing on the soft sand, and his feet sank in, leaving the depression or track.

Not many miles from these giant human tracks are the well-known dinosaur tracks near Cameron, Arizona. Truly the fertility of the soil, as well as its moisture supply, has greatly deteriorated since these giant reptiles and giant humans roamed these plains. Thus the primitive writing of “footprints on the sands of time” attests to the truth of Holy Writ. Degeneration, not evolution, is the apparent verdict. By comparing the size of Mr. Petursson’s shoe with that of our Petrified Forest giant, we might well conclude that the latter was from ten to twelve feet tall, and prob-ably weighed more than five hundred pounds. Together with this superb physical development went a giant intellect that would shame the mental aberrations of degenerated man.

Other Early Examples include:

The tracks found near the Petrified Forest compare favorably with those found in the gypsum flats of the White Sands of New Mexico. Both locations show about the same size and shape of sandal. In the case of the Arizona tracks, the giant was standing, while the New Mexico tracks indicate that the man was taking giant strides. Ellis Wright, a government trapper, first reported the discovery of these tracks west of the White Sands, now a national monument. Thirteen footprints were found in all, each about twenty-two inches long and eight to ten inches wide. On the side were found marks apparently made by a staff or cane the giant was using.

Other tracks, apparently human, but of smaller size, have been dug out of a sandstone quarry at Ashfork, Arizona.

The conclusions from these remark-able discoveries are crystal clear, but have far-reaching repercussions :

port; therefore with the collapse of the geological age theory, the generalization of organic evolution also collapses.”