The ANTIKYTHERA MECHANISM This curious mechanical device is often described as the World’s first analogue computer was retrieved by sponge divers off the coast of Antikythera in or around 1900AD.

Scientists all agree that the ANTIKYTHERA MECHANISM is real and that it dates the the 2nd century BC making it well over 2,000 years old.  The ANTIKYTHERA MECHANISM comprises of a complex system of dials, gears and cogs of extraordinary precision. Experts agree that it represents a standard of production that would not be seen again until the rise of complex clocks and clockwork in the 18th century.
After many years of research the current thinking is that the ANTIKYTHERA MECHANISM was used as an astronomy calculator to predict and measure the movement and cycle of the planets in relationship to the Sun, Earth and the Moon. at one time.  For decades after its  rediscovery the importance of the find was overlooked until archaeologists and modern scientist began to appreciate the significance of such early mechanical sophistication. 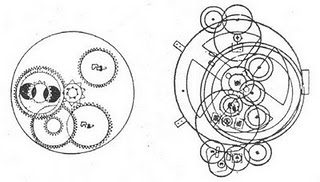 Since then the ANTIKYTHERA MECHANISM has been x-rayed many times using evermore advanced equipment.  Working reconstructions have been made and entire research groups established to unlock the secrets of its manufacture and its purpose.

ANTIKYTHERA MECHANISM’s existence has challenged many preconceived ideas regarding the technological abilities of the ancient civilisations.
http://www.aquiziam.com/ancient-technology.html

I find that this device is an example of “scavenged technology” it was used for purposes much later than its intended purpose. It was indeed used as an computational device for a clockwork time piece.
I find it coincidental and very intriguing that this was found off the coast of Crete. This area has a unique historical record of ancient robots of immense size.
On the island of Crete was said to exist a robot named Talos, who hurled boulders at ships. If Talos did exist we might expect to find a scavenged piece of that technology lost in the nearby sea. Unless you follow “Greater Ancestry” such a find might not be compared to the historical records of Greater Technology.
~Chris L Lesley