Ancient trees more than twice the height of the tallest giant redwoods? 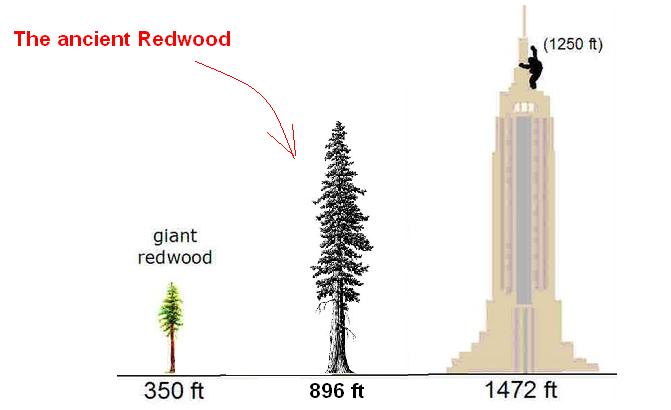 “They studied giant redwoods, the tallest trees on earth in Humboldt County California to reach these conclusions. They hypothesized and verified experimentally that as trees reached the height of 425 they could pump less and less water and nutrients up to new growth at that level. No current tree in the world has reached this height.

In effect, maximum tree growth is limited by gravity and friction.

Scientist George Koch and colleagues believe that they have established the upper limit for tree height. In an article entitled “Study Limits Maximum Tree Height”, by Jonathan Amos, which appeared in the BBC News Online in April 2004, that maximum tree height is about 425 feet.

Back in 1938, some scientists were speculating that the earth was shrinking and gravity along with it because of a huge petrified pine tree, well over three hundred feet tall found in the Rainbow Petrified Forest in Arizona.

In article sub-titled “Recent Discoveries in Petrified Forest Leads to Belief This Old Globe Is Gradually Contracting” (The Ogden Standard-Examiner, February 13. 1938) various scientists discussed the idea that at the time this petrified tree with its huge root system lived on the earth, its circumference was approximately 30,000 miles rather than the current 25,000. The larger earth would have exerted an attenuated (weaker) gravitational force on the trees and animals of that time.

According to the scientists quoted in the article,

“Since the newly discovered petrified tree Is of the Araucarias species, a form of pine which, when its sap is running, is of considerable weight, it probably weighed per lineal foot as much as modern-day smaller trees, and therefore seems to indicate that the magnetism and force of gravity of the earth at the’ time it grew were more dissipated, an indication that the earth itself possessed a greater diameter.”

These petrified trees had been transformed into onyx, jasper, agate, carnelian and chalcedony. Today, the giant redwoods are the growth champions. The various varieties of Araucarias would not have been expected to reach the same exalted heights.

The discovery that caused this scientific introspection occurred in 1938.

What the authors had overlooked in finding a petrified 300 foot plus tree of the Araucarias variety and finding themselves perplexed by it, is that a much larger tree had already been discovered in —Texas by federal geologists.

had been discovered in a petrified forest in Texas. According to an article in the Sunday, January 23, 1927 Port Arthur News, a petrified tree of the

Based on common sense, experience and the scientific article quoted herein establishing 425 feet as the upper limit for tree height, clearly something anomalous was going on in the distant past. Perhaps, more properly the earth’s current gravity is the anomaly.

According to the article, the forest is situated in a virtually inaccessible region in a valley of the Big Bend, nearly 100 miles from the nearest railroad spur at that time.

The forest was immodestly referred to as the greatest Petrified Forest known to man.

Mere stumps of trees rose 100 to 150 feet into the air. A thick covering of volcanic ash and pumice stone is said to have covered the trees and it is thought by the geologists/discoverers to have come from a volcano in the nearby Chisos mountains.

“One tree trunk measured 896 feet in length and the upright trunks are so large that they appear from a distance to be great symmetrical columns of natural rock. These federal geologists tell the -story. They have visited this distant valley, which is split by a deep arroyo leading into the Rio Grande.”

Clearly, if what this 1927 story reports is true, that 900 foot tree is more than twice that was projected by some scientists working in that field, as the maximum tree size obtainable in today’s gravity conditions. This means that gravity was somehow attenuated in the “distant” past.”

(I won’t rest until all of the greater-ancestors are found. Side Note: I was given a short list by an evolutionist during a debate and Redwood trees was on his list, previously it was on my difficulty-list along with rabbits, blue whales, as well as animals with giant in front of their name.) Chris L Lesley