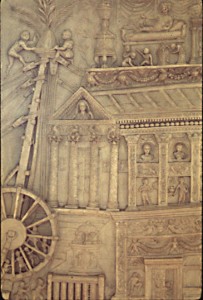 Giant cranes were employed in construction just as cranes are used today.

“In a treadwheel crane, people walk on the inside of a large wheel (think of a hamster wheel) and the weight of their bodies provides the lifting force. Treadwheel cranes have been used in England since Roman times.

An earlier version of this note suggested that the crane had no brake and relied on the walkers’ weight to keep the load from falling. [H] replies: “I believe this is not quite right, that it actually does have brakes on the wheels but that they failed because the load was too heavy and the mechanism broke. The brakes are referred to as “stoppers” and are probably like the ratchet mechanism in a clock, with the stopper being the pawl. On page 11 [after the accident], Fister says ‘That load wer too much for that weal … it wer the stoppers coming luce and the weal took charge.’

The use of two stoppers per wheel would either be simply for more strength, to prevent just this from happening, or alternately having each of the two per wheel engage in an alternating fashion so that the wheel won’t have as far to turn and won’t build up as much momentum if it does start to turn backwards, also to keep it from failing. With these large loads and a crane built, I assume, out of wood, the working parts would have to be large for strength. This means using larger teeth on the ratchet wheel, and therefore possibly requiring the latter of these two configurations. Either way, when Riddley tripped and knocked over the others working his wheel the stoppers had to take the strain, which they failed to do, causing all the force to be held by the other wheel, and then it too failed. It is a small point, but might be significant because it permits Riddley to be absolved of any blame in the accident, at least by Fister and Straiter Empy.”