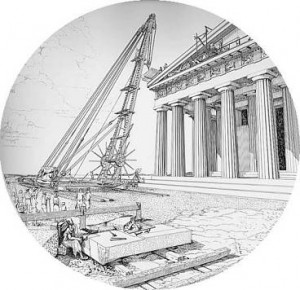 Archaeologists assume that cranes were used in Greece since 900 BC (although there is no direct proof). After a recent discovery of a 2.3 ton and 2900 years old sarcophagus in Corinth an archaeologist (Guy Sanders) said: “To lower the sarcophagus into place in a controlled movement … requires some kind of temporary superstructure over the grounds so they can control the vertical movement of the stone”.

or temples (according to Vitruvius Greek Cranes could lift 6 tons, The columns were build by parts, so-called column drums, with a weight each more than 1 ton.