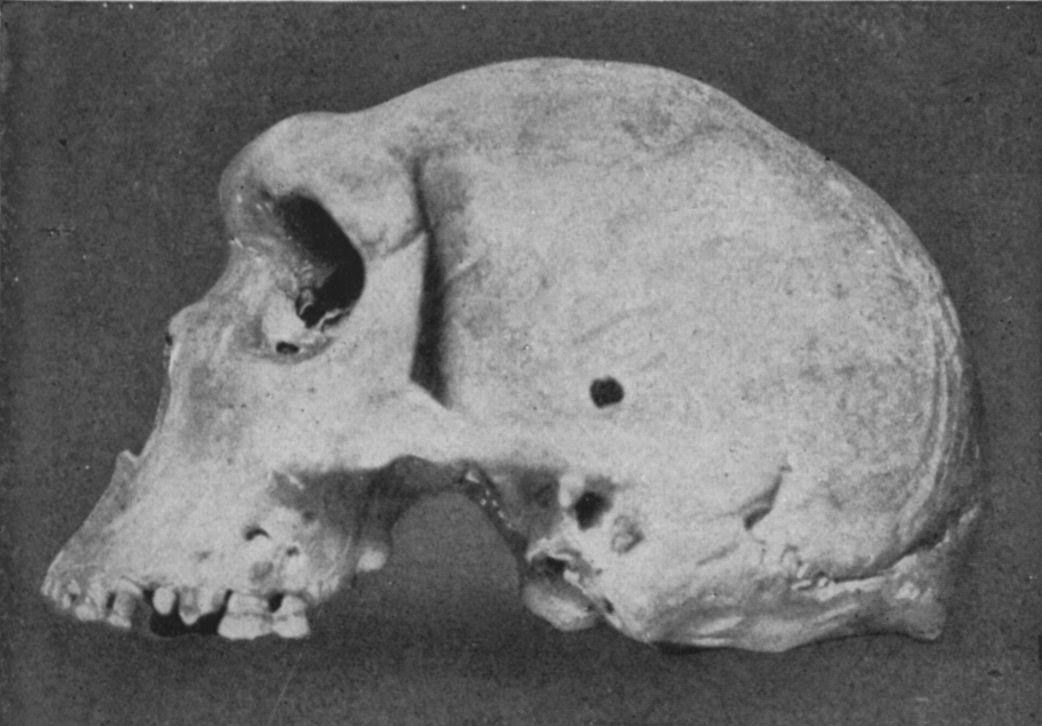 “When a skull is struck by a relatively low-velocity projectile – such as an arrow, or spear – it produces what are known as radial cracks or striations; that is, minute hairline fractures running away from the place of impact,” wrote The Shields Gazette. “As there were no radial fractures on the Neanderthal skull, it was unanimously concluded that the projectile must have had a far, far greater velocity than an arrow or spear.”

German forensics expert made an even more radical conclusion – “the cranial damage to Rhodesian man’s skull could not have been caused by anything but a bullet”.

Researcher Rene Noorbergen, who investigated, concurred, saying that “this same feature is seen in modern victims of head wounds received from shots from a high-powered rifle.”

The ancient skull was shot in ancient times by a technologically advanced civilization. Other options are discounted by the fact that the skull was found 60 feet below the surface, which confirms that it is at least several thousand years old, and was not exposed near the ground to have been accidently or intentionally shot in recent decades.  Does that just leave us with one option. 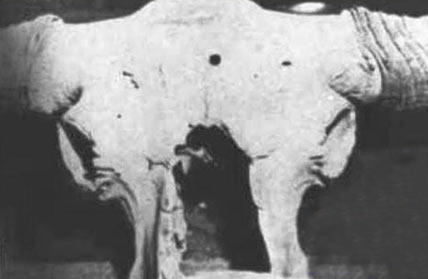 Auroch skull with bullet-like hole in the forehead.

The skull, which is now on display in Moscow’s Museum of Palaeontology, could not have been struck by a bullet in more modern times because calcification around the bullet hole shows that the auroch survived the wound for some time afterwards.

Numerous hypotheses and speculations have surfaced, from radical theories, such as the idea proposed by The Shields Gazette that “someone from the future, carrying a firearm, travelled back into the past and engaged in some sort of trans-temporal hunting expedition”, to the slightly more plausible suggestion that the holes were caused by shrapnel from a small meteorite or something similar.

Ancient was technologically developed to a very high degree and invented weapons that just happened to fire small, cylindrical projectiles at high speed.

An old skull in the William H. Over Museum at the University of South Dakota has a round hole in the frontal region and a label pasted to it identifying an old human skull is labeled “bullet hole above the left eye.”

In radiographs the abnormality is not typical of the defect usually produced by a solid projectile injury. Although the exact causative mechanism for this interesting and unusual abnormality is conjectural, it is worthy of documentation.

Specimen #4661 from the skeletal collection of the W. H. Over Museum of the University o South Dakota is a well-preserved human male adult skull, 30-40 years of age. Mandibular and maxillary teeth were missing. No data as to race or cultural affiliation, or as to the time in history the individual may have lived, accompanied the specimen. (Ancient)

Just posterior and superior to the orbit there is a rounded circumscribed defect about 2.0 cm in diameter involving the entire thickness of the frontal bone. The insert shows the defect enlarged. The sharply defined margins of the hole are beveled toward the bones outer surface. The bone of the calvarium’s outer and medial surfaces at the periphery of the hole is not shattered. There is scalloping of the defect’s edges anteriorly and cuts in the bone at the anterior superior margin of the defect. There is no evidence of reparative response, osteitis, or osteomyelitis in the gross specimen or in radiographs. 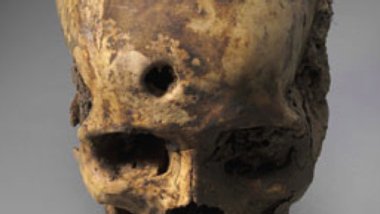 “What looks like a bullet hole”  in this ancient skull is claimed the result of a sophisticated medical procedure called trepanning more than 3500 years ago in what is modern day Sudan. We do know, however, that the individual survived long enough after the injury for the bone to heal significantly. 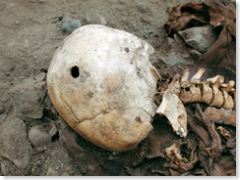 The musket blast was sudden and deadly,. . . what may have been the first gunshot victim in the Western Hemisphere.

“We didn’t expect it. We saw this skull and saw the almost round hole and thought people must have been shooting around here recently,” said Guillermo Cock, an archaeologist who found the remains near Lima, Peru.

But he realized that the skull was ancient, and a recent bullet strike would simply have shattered it, Cock said in a telephone interview. The skull was found among a large group of bones of ancient Incas. The bones were in shallow graves, leading the archaeologist to speculate the burials were done hurriedly during conflict.

To be sure this was a gunshot wound — making it the earliest one documented in the Americas — the skull was studied by forensics expert Tim Palmbach at the University of New Haven, who brought in other experts.

Al Harper, director of the Henry C. Lee Institute of Forensic Science in New Haven, Conn., said the team “tried to rule out all kinds of causes of the hole — a rock from a slingshot, spear, sledgehammer.” Harper and Palmbach studied the skull with a powerful scanning electronic microscope.

“We all thought it was a million-to-one chance that we would find any traces of metal on a skull that old, but it was worth a try,” Harper said in a statement.

But there they were, fragments of metal from a bullet impregnated the area surrounding the hole.

One skull in particular had both an entrance and exit wound, suggestive of a bullet and prompting him to seek experts to study it. A plug of bone from one of the holes was recovered nearby, he added.

The conclusion: A projectile less than an inch in diameter struck the back of the skull and passed through the head. 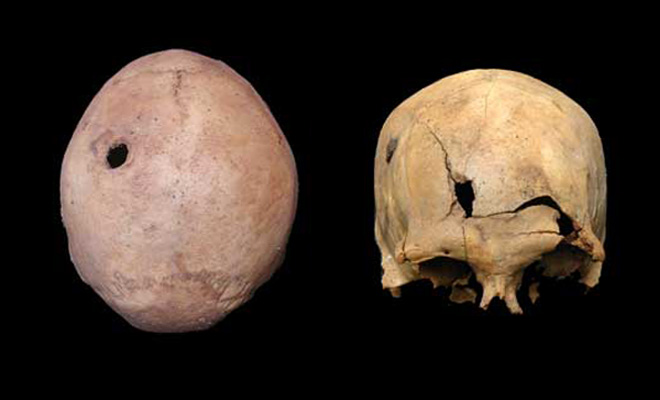 Surprisingly, though, no incisions or other marks characteristic of sword injuries appear on these bones, according to a team led by anthropologist Melissa Murphy of the University of Wyoming in Laramie. Spanish documents from the 16th century emphasize steel swords as a favored military weapon.

Skeletons in the Inca cemetery, as well as at another grave site about a mile away, display a gruesome array of violent injuries, many probably caused by maces, clubs and other Inca weapons, the researchers report. “The nature and pattern of these skeletal injuries were unlike anything colleagues and I had seen before,” Murphy says. “Many of these people died brutal, horrible deaths.”

“I’m struck by the severity of violence in certain individual cases, where the skull was essentially crushed, repeatedly stabbed or struck, or shot through by gunshot,” comments archaeologist Steven Wernke of Vanderbilt University in Nashville. Whoever killed these individuals wanted to intimidate survivors as well, he asserts.

Family members collected their bodies and buried them quickly near previously deceased relatives, she speculates. These skulls with bullet holes were in fact intermixed with other ancient remains found in the same graveyard. 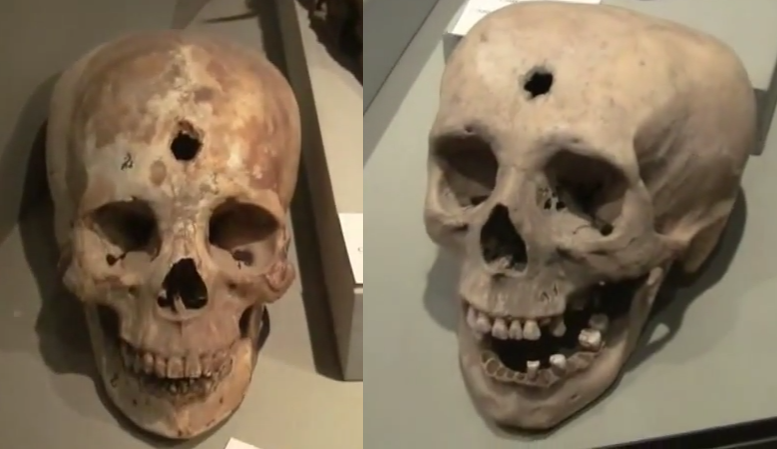 Bullet Holes of Nazca and Paracas

These are called trophy-skulls, each have a projectile hole centered in each of their skulls, as you can see the holes are ragged and not precisely drilled. There are slight stress cracks which attests to high speed projectiles at slower speeds there would be greater cracks and even breakage.

Elektrokissa : “Those holes, look very much like bullet holes to me. I’m not an expert though. ”

Also called “bullet beads”, these trinkets made of granite, flint and dolomite are the right size to be fired from a musket of revolver. In fact lead projectiles have been found all over the world, said to have been used for slings but in fact none have been tested for sulfur of gunpowder residue.

Lead sling bullets none have ever been tested for gun powder or traces of sulfur.

Evidence of Spanish bullet holes in 500-year-old Inca skulls, found at a burial site on the outskirts of Lima, Peru Science News April 2, 2010