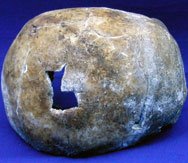 Enlarge Greek Culture Ministry via AP The skeleton of a young woman from a 3rd century A.D. grave in Veria, Greece. Archaeologists believe a large hole on the front of the skull was caused by brain surgery nearly 1,800 years ago. Although references to such delicate operations abound in ancient writings, discoveries of surgically perforated skulls are uncommon in Greece.

THESSALONIKI, Greece (AP) — Greek archaeologists said Tuesday they have unearthed rare evidence of what they believe was brain surgery performed nearly 1,800 years ago on a young woman — who died during or shortly after the operation.

Although references to such delicate operations abound in ancient writings, discoveries of surgically perforated skulls are uncommon in Greece.

Site excavator Ioannis Graikos said the woman’s skeleton was found during a rescue dig last year in Veria, a town some 46 miles west of Thessaloniki.

“We interpret the find as a case of complicated surgery which only a trained and specialized doctor could have attempted,” Graikos said.

Brain surgery was practiced by doctors at least 2,900 years ago, a specialist on Tibetan culture and literature said after four decades of research on the Tibetan Tripitaka, an ancient encyclopedia. “The 2,900-year-old Tibetan Tripitaka states clearly why and how brain surgery was carried out,” said Karma Trinley, an associate professor from the Tibetan language and literature department of Tibet University in Lhasa, capital of southwest China’s Tibet Autonomous Region.

Tripitaka describes in detail how a young Indian doctor watched brain surgery being performed by a veteran surgeon. The book said that the patient was suffering from a severe headache and repeatedly knocked his head on hard objects to ease the pain. When the young doctor, whose name was similar in pronunciation to the Tibetan name Tsogyel, saw the surgeon trying to operate on the patient’s brain with a pair of tweezers, he shouted that the tweezers had to be heated first. Trinley said Tsogyel’s advice on sterilization helped raise the success rate of surgery at the time. Tsogyel later became a skilled surgeon himself.

The Tripitaka is the earliest collection of Buddhist writings. The information contained in the writings was originally passed down orally, and was finally written down in the third century BCE. Trinley said that many of the medical theories in the book are still used by Tibetan doctors today.

Evidence of ancient brain surgery in the area was first found in 1998, when archeologists unearthed human skulls with mended cracks on the Qinghai-Tibet Plateau. These cracks indicated that craniotomies were probably performed by the Chinese over 5,000 years ago.

Before the Tibetan Tripitaka’s description of brain surgery was discovered, researchers used to disagree on the purpose of ancient craniotomies, said Karma Trinley. “Some believed it was a religious ritual to dispell evils or bring happiness, while others held that it was a therapy used by witches and wizards,” he said.

You might shudder at the mere thought of ancient brain surgery, but recent studies of the practice at Bronze Age sites in Turkey suggest that early neurosurgeons were surprisingly precise and that a majority of their patients may have survived.

At Ikiztepe, a small settlement near the Black Sea occupied from 3200 to 1700 B.C., archaeologist Önder Bilgi of Istanbul University has uncovered five skulls with clean, rectangular incisions that are evidence for trepanation, or basic cranial surgery. The procedure may have been performed to treat hemorrhages, brain cancer, head trauma, or mental illness. Last August Bilgi also unearthed a pair of razor-sharp volcanic glass blades that he believes were used to make the careful cuts.

There is ample evidence that Bronze Age sawbones knew what they doing. Last summer, biological anthropologist Handan üstündag of Anadolu University in Turkey excavated the 4,000-year-old trepanned skull of a man at Kultepe Höyük in central Turkey. üstündag says the surgeon cut a neat 1- by 2-inch incision, and “there are clear signs of recovery in the regrowth of bone tissue at the edges.” Judging from the frequency of healed bone in such skulls, anthropologist Yilmaz Erdal of Hacettepe University in Turkey recently proposed that about half of all Bronze Age trepanation patients—and 60 percent of those in Turkey—survived the procedure.

Brain surgery in ancient Peru, the Incas and the Tumi!

77rate or flag this page

It was with much pride and fascination that I read the article Excisions, written by my brother Will (writing under the name of Wagster). In it he not only talks about famous Connecticut neurosurgeon Dr William Scoville, but also about two of his patients: H.M and J.G.

J.G. happens to be my father and it is for that reason that I am writing this hub now, as I also used to call him Papi and because the Tumi, so often mentioned in Will’s article, is a symbol of my home country Peru.

I was used to seeing the Tumi in all types of Peruvian handicrafts: wall ornaments, copper artefacts, wall hangings, carpets and jewellery. I knew the Tumi shape well, but It had never occurred to me to think that it was a knife, or what it was originally used for. It was only after reading my brother’s article that I came to realize that it was used to carry out trepanations (trephinations) on people’s heads!

Suddenly all the handicrafts my mother used to have in her Inca Shop in Brisbane loss all their innocence and I was not sure whether I liked the famous Tumi anymore! I was proud before when I saw it decorating a wall in some faraway place, but suddenly it had other connotations, as I now associated it with blood! I could not forget though that the Tumi really means good luck and that whether I like it or not, it is a symbol of my country Peru!

Pre-Incan civilization used brain surgery extensively as early as 2,000 B.C. In Paracas, Peru, a desert area south of Lima, archeologic evidence shows that brain surgery was indeed carried out and that many were successful, with patients surviving the procedure and being restored to health.

Examination of ancient Peruvian skulls by physicians today, reveals that these cranial surgeries seldom became infected, with most surviving. What is even more impressive are the skulls exhibiting successful cranio-plasties, which are plates made of silver and gold, placed with such skill that the bone healed around them.

Analysis of the data leads one to conclude that, despite their rudimentary knowledge of disease, the ancient Incas must have had some knowledge of anatomy and surgical procedures in order to accomplish what they did. Surgical tools in South America were made of both bronze and obsidian (a hard, dark glassy rock formed when laval cools).