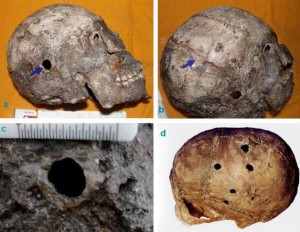 Evidence of Brain surgery from Harappa.
In the case of the Harappa skull,

in the form of a visible linear depression, probably resulting from a severe blow. . .
There is evidence too of healing indicating that the victim survived for a considerable time after the operation.

Scholars have recorded striking similarities in trepanation techniques across the continents, and therefore consider it as important evidence for prehistoric movements of people and for transfer of surgical skills from one society to another.

The description of the surgery that survives suggests that they artificially induced a coma with a special preparation known as the sammohini and then opened his skull to remove the tumor. He was then brought back to consciousness with another drug.
Bhoja survived this surgery remarkably well and had an illustrious reign both as a military commander and encyclopaedic scholar.