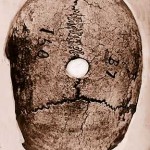 Equally mysterious are the Michigan copper mines. We today have no idea who mined the copper in Michigan starting from about 5000 BCE. But we know they opened many copper pits in the thousands across upper Michigan. We know they used mauls to chip out the ore. They made copper tools with some of their copper but what did they do with the bulk of it? We estimate today that these people mined about 1.5 billion pounds of copper. The level of mining sophistication would have required 10,000 men to spend about 1000 years developing that technology. Lake Superior copper had turns up in old Indian implements from Michigan to South America but still the bulk of the copper must have gone overseas simply because there is no trace of it in the Americas. Indeed, there are archaeologists who claim Lake Superior copper can be found in tools and artifacts from all over the ancient world before the times of Christ. Who transported it, where and how? Even stranger, why did these mysterious copper miners leave behind no traces whatsoever of their culture other than the tools they used to mine? No petroglyphs or rock art, pottery, figurines, hunting implements, dwellings or burial mounds have ever been found. Only their stone mauls and copper axes used to chip out ore and separate it from the copper have been found along with copper knives, arrowheads and spearheads. Moreover, they appear to have dropped their tools and walked off the face of the earth. Their mauls are found at mining pits left as though the miners had set them down and gone home for the day, ready to resume work in the morning but that morning did not come. No one knows why or even when this happened although it would seem that 1200 BCE would be the cut-off point.

The Michigan mounds are also mysterious because the local Indian tribes do not claim them. Their legends say that their ancestors had taken the land from an “evil” people who mined copper and built the mounds (archaeology shows that the mounds were not built by the people who mined the copper). According to a Detroit news article, the Ottawa Indians call the mound-builders “yam-ko-desh” or “prairie people.” Michigan had at least 1100 mounds at one time. Artwork recovered from one mound showed an unmistakable elephant being used as a beast of burden. From one mound in Sanilac County in Michigan’s thumb area, Professor W. B. Hinsdale of the University of Michigan discovered the following skull fragment while surveying the mounds in 1925:

The caption beneath above photo reads:

“This skull found in a Michigan burial mound reportedly suggests that the early inhabitants of the state were performing brain surgery well before the birth of Christ.”