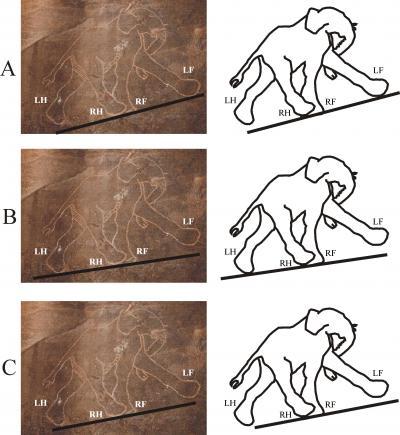 Dec. 5, 2012 — Prehistoric artists were better at portraying the walk of four-legged animals in their art than modern man, according to new research published December 5 in the open access journal PLoS ONE by Gabor Horvath and colleagues from Eotvos University (Budapest), Hungary.

According to new research, the answer is yes.

Most quadrupeds have a similar sequence in which they move each limb as they walk, trot or run, and this sequence was studied and outlined in the early 1880s by Eadweard Muybridge. The authors examined (ancient) and modern artwork ranging from cave paintings of cows and elephants to statues and paintings of horses, elephants and other quadrupeds in motion to see how well these artistic depictions matched the scientific observations of animal motion.

They found that the majority of depictions of these animals walking or trotting had their legs incorrectly positioned, but the (ancient) paintings had the lowest error rates of 46.2%, whereas modern pre-Muybridgean art depicted animal motion incorrectly 83.5% of the time.

The prehistoric artists likely spent a great deal more time observing the details of animal movement than later ones because they were hunters as well, and so were their viewers. Later artists primarily needed to persuade the viewer, most likely not a hunter, that the depiction was skilled and interesting, in conformity with a tradition. The development of photography and cinematography, however, meant that an attempt at realism could be checked for accuracy, raising the bar once again.

The eyes work  like a camera and it is my interpretations that the outcome shows that ancient humans had superior vision with high speed, fast moving objects. A superior vision, with superior hand and eye coordination creates superior art.