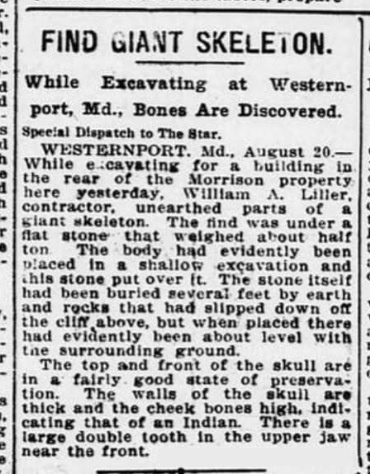 While Excavating at Westernport, Md., Bones are Discovered.

Special Dispatch to The Star
WESTERNPORT, Md., August 20. –  Bones Are Discovered.
Special Dispatch to The Star.
WHSTERNPORT. Md., August 20 ? While e .cavating for a building in the rear of the Morrison property here yesterday, William A. Eiller, ; contractor, unearthed parts of a 1 giant skeleton. The tind was under a flat stone that weighed about haif ‘ ton The body had evidently been 1 placed in a shallow excavation and : .his stone put over ft. The stone itself ‘ had been buried several feet by earth and rgeks that had slipped down oft the cliff above, but when placed there had evidently been about level with ‘ toe surrounding ground. The top and front of the skull are in a fairly good state of preservation. The walls of the skull art thick and the cheek bones high, lndi- .eating that of an Indian. There is a large double tooth in the upper jaw ; near the front. .