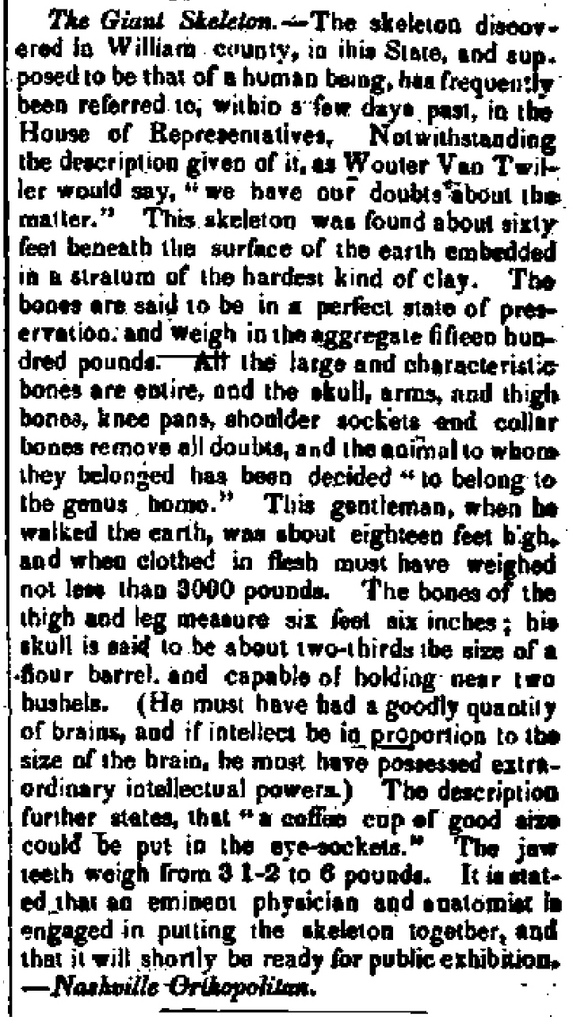 -The skeleton discovered in William county, in this State, and supposed to be that of a human being, has frequently been referred to, within a few days past, in the House of representatives. Not withstanding the description given to it,  as Wouter Van Twiller would say, “we have out doubts about the matter. ” This skeleton was found about sixty feet beneath the

surface of the earth embedded in a stratum of the hardest kind of clay. The bones are said to be in a perfect state of preservation and weigh in the aggregate of 15 hundred pounds. All the large and characteristic bones 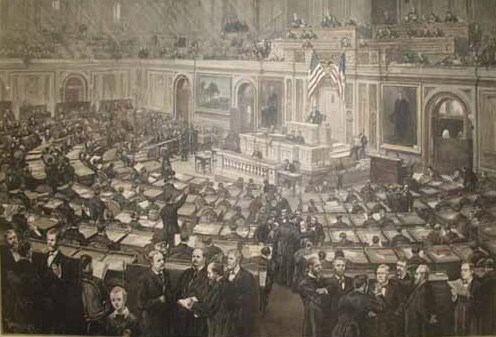 are entire, and the skull, arms and thigh bone

s, knee pans shoulder sockets and collar bones remove all doubts and the animal to whom they belonged has been decided “to belong to the genus homo” This gentlemen, when he walked the earth was about eighteen feet high, and when clothed in flesh must have weighed not less than 3000 pounds. The bones of the thigh and leg measure six feet six inches ; his skull is said to be about two-thirds the size of a flour barrel and capable of holding near two bushels. (He must have had a goodly quantity of brains, and if intellect be in proportion to the size of the brain, he must have possessed extraordinary intellectual powers) The description further states that “a coffee of good size could be put in the eye-sockets,” The jaw teeth weigh from 3 1/2 to 6 pounds. It is stated that an eminent phsyician and anatomist is engaged in putting the skeleton together, and that it will shortly be ready for public exhibition. -Nashville Orthopolitan.