A Giant Race in New Mexico

Aug. 9, 1899: “With the trophies of his summer’s explorations spread out about him, Dr. Cole has turned his parlor into an anthropological museum. One table is covered with water jugs and incense pipes, the sofa hidden under stone axes, mortars, pestles, weaving shuttles and pottery; another table is decked with a row of grinning skulls and huge crossbones; beneath it comfortably repose all the parts of a skeleton, from the toe bones to the shoulder blades, waiting to be wired together, and strewn about are bows and arrows, baskets, jugs of twisted twigs made water-tight by pitch; modern Indian pottery, photographs by the score, and a hundred-pound stump of petrified wood. The skulls are a particularly valued possession.”
The Rev. George L. Cole of Los Angeles tells amazing stories of a weird, ancient culture that

flourished in the cliffs of New Mexico. A race of people up to (8 feet tall ) with curious teeth, who worshiped the sun and considered the turkey to be a sacred animal.  They also played flutes made of pelican bones, Cole said. (Pelicans in New Mexico, eh?…).  (Sept. 5, 1900): 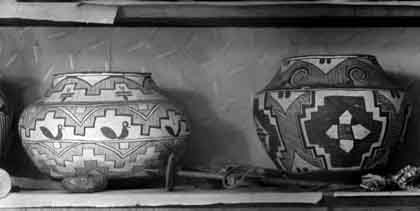 “One bit of pottery is supposed to have been a tear bottle, in which penitents collected their bewailings and buried them…”

“A Sept. 5, 1900, story in The Times says Cole’s human remains and artifacts were sent to
Northwestern University.   A Feb. 22, 1908, story says his collection of relics was to be put
on display at Venice Pier…

His son, Fay C. Cole, was affiliated with the Field Museum in Chicago.