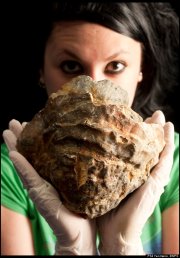 Aquarist Jenna MacFarlane from the Blue Reef Aquarium with a gigantic oyster fossil that was accidentally trawled up by fishermen off Portsmouth is to be MRI scanned to see if it contains the worlds biggest pearl. The prehistoric mollusc is more than 100 million years old and is ten times bigger than a regular oyster shell. It was hauled up in the Solent and found in the nets of the trawler boat when it returned to port. After layers of mud were washed off, it was clear the item was a huge fossilised shell that measured seven inches wide and three inches thick. The shell of this size was nearly 200 years old when it died and could be concealing a pearl the size of a golf ball, dwarfing the size of an oyster pearl’s found today. BNPS.co.uk

How big is the pearl inside an oyster the size of your face? According to the Daily Mail, experts at the Blue Reef Aquarium in Portsmouth, England, are trying to determine just that.

The Daily Mail speculates that the massive mollusk fossil below, which clocks in at 10 times the size of your average oyster . . . . , “could be concealing a pearl the size of a golf ball.”

The oyster reportedly turned up in the Solent, a strait separating mainland England from the Isle of Wight.

From the size of the shell, it seems unlikely that any pearl inside this fossil could top the behemoth, clam-produced Pearl , which weighs 14 pounds and is estimated to be worth $60 million: 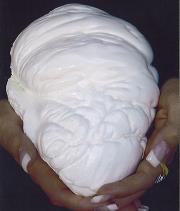 An oyster produces a pearl when an irritant slips inside its shell, prompting the invertebrate to cover the foreign object with a substance called nacre. Layers of this material coat the object, forming a pearl.

It’s been a good year for oyster-hunters. In May, a man in northern California discovered an oyster measuring a record-breaking 13 by 6 inches. 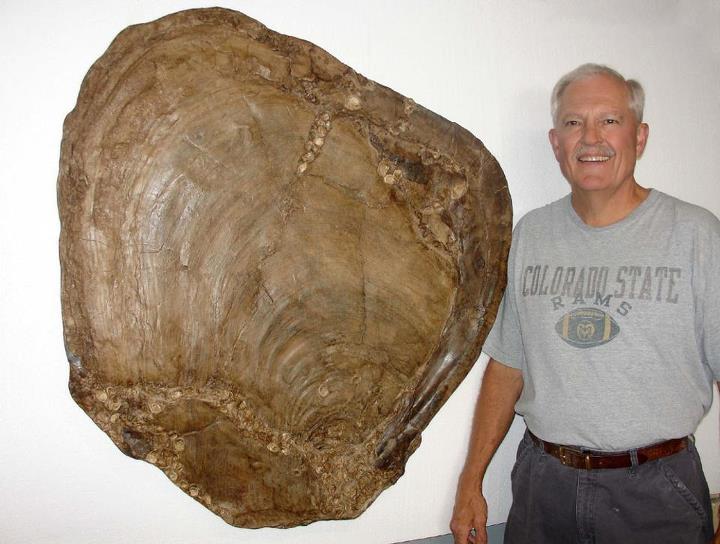 Its good to occasionally see what the top contender is in his case a oyster, the largest living but by no means is this weaker descendant more impressive than the giant oysters of the past.

Gigantic Oyster, 43″ tall x 39″ across. BEAUTIFUL specimen with numerous small rudist: Pseudoperna congesta. Preservation is OUTSTANDING! Specimens of this size and quality are almost unheard of in the fossil record!! Specimen contains hundreds of clearly defined growth rings! These rings, of variable thickness, resemble the growth rings in a tree trunk. They vary from 7 to 15 rings per inch. Specimen weighs approximately 65 pounds