A Giant Horse from El Salvador 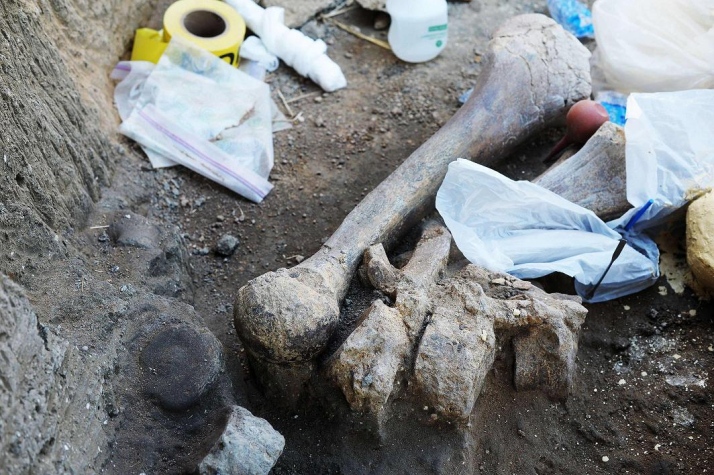 At least twelve fossil pieces, including remains of a giant horse

has been discovered in a new paleontological site of El Salvador.

SAN SALVADOR – Parts of the skull of a giant horse, were unearthed from the banks of a river on the outskirts of Apopa, north of San Salvador, found an AFP.

“Dug up the remains of what was a giant horse and now finished unearth a femur, vertebrae and other bones of a mastodon that lived many years ago in this region,” he told AFP paleontologist Daniel Aguilar, the Natural History Museum (MUHNA) .

The bones were taken from a wall of earth Acelhuate the river, in northern Apopa, a town 12 km north of the Salvadoran capital.

“Apopa and other nearby areas are places where it has been able to establish that it was as a habitat for many animal species, as it was a region of swamp, with plenty of water and vegetation, and so we believe that many died here and now we are finding these remains “said Aguilar.” 1

“We have descended to the ground carrier having fossils (…) has already reached some of the materials which are of great importance to paleontology,” he told Efe the expedition leader, paleontologist Daniel Aguilar.

“There’s an event that belongs to the remains of a horse and an event below is the skeleton of a mastodon”, but said it is “too early to say all the taxonomic information of animals” that are on the site as yet to be extracted for analysis.

The official opening of the New paleontological excavations Resume site in the municipality of CV, located about 12 km from San Salvador, took place today in the presence of officials from the Ministry of Culture of the Presidency and the local mayor, José Elias Hernandez.

The fossils that are extracted from the excavation will be moved to the Museum of Natural History in El Salvador (MUHNES), where they will be preserved for taxonomic identification (scientific information) and for future paleontological studies, said the Ministry of Culture.

The first date CV paleontological excavations in 2001 and took place in the Tomayate River, 20 miles north of San Salvador, where they found more than “2,000 pieces, including fragments and complete materials” of about “23 different species,” said Aguilar.

Some of the species are “mastodons, giant sloths (…) giant armadillos.”

He noted that they are “trying to get as much information to know if it’s the same influence” Tomayate.

Among some of the most important findings Tomayate site is the discovery in 2005 of the skull and other parts of the skeleton of a young mastodon.

There is also the discovery of the “milk molar of a short-faced bear, which is just the third in the world which is” explained Aguilar.” 2

Giant horses? really? . . . Yes! There have been 12 documented locations of a horse called Equus Giganteus which by microcephalus reconstructions would have been 10 – 13 feet in height. I have put together a power point presentation on horses indicating that horses have gradually shrunk in size each century and some articles of horse finds that are so amazing that it diminishes today’s horses even as majestic as they still are. The power=point presentation and information is only available at public speaking engagements. You can see a detailed wall map of the giant horse finds on display at the museum.