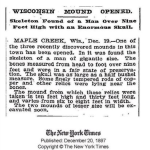 Skeleton Found of a Man Over Nine Feet High with an Enormous Skull. Wisconsin

MAPLE CREEK, Wis., Dec. 22.- One of the three recently discovered mounds in this town has been opened. In it was found the skeleton of a man of gigantic size. The bones measured from head to foot over nine feet and were in a fair state of preservation. The skull was as large as a half bushel measure. Some finely tempered rods of copper and other relics were lying near the bones. Wisconsin Wisconsin.

The mound from which these relics were taken is ten feet high and thirty feet long, and varies from six to eight feet in width.  The two mounds of lesser size will be excavated soon. Wisconsin.

Maple Creek is a town in Outagamie County, Wisconsin, United States. The population was 687 at the 2000 census. According to the United States Census Bureau, the town has a total area of 21.7 square miles.

2. Another 100 Ancients Bigger than Robert Wadlow: