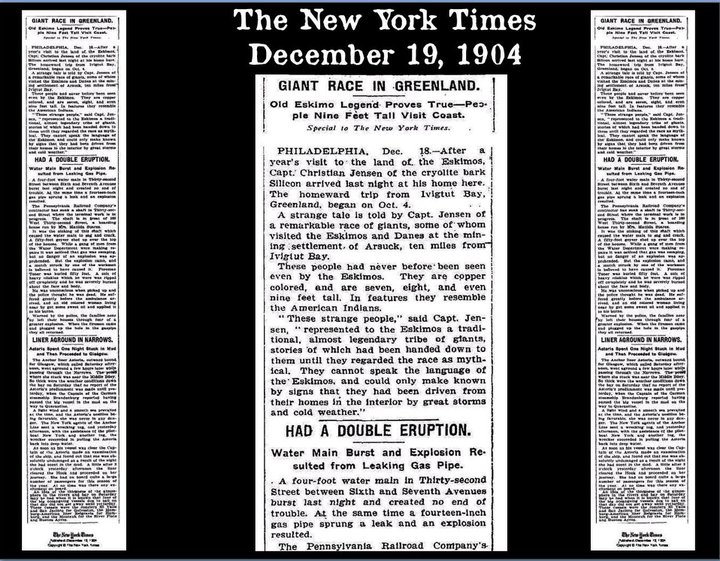 PHILIDELPHIA, Dec. 18-After a year’s visit to the land of the Eskimo’s, Capt. Christian Jensen of the Cryolite bark silicon arrived last night at his home here. The homeward trip from Ivigtut Bay, Greenland, began on Oct. 4.

A strange tale told by Capt. Jensen of a remarkable race of gianst, some of whom visited the Eskimos and Danes at the mining settlement of Arsuck. ten miles from Ivigtut Bay.

These people had never before been seen even by the Eskimos. They are copper colored and are seven, eight, and even nine feet tall. In features they resemble the American Indians.

“These strange people,” said Capt. Jensen, “represented to the Eskimos a traditional, almost legendary tribe of giants, stories which have been handed down to them until they regarded the race as mythical. They cannot speak the language of the Eskimos, and could only make known by signs that they had been driven from their homes in the interior by great storms and cold weather.”

It should be noted that, from the description given by the eskimos that these are not the Vikings. This is not the red haired, blonde haired white giants or what is commonly referred to as the Sea People.

Found Giant Race in the North