Incidentlly an interesting discovery of a giant human skeleton in a mound to West Virginia was made recently by a group of University of Pennsylvania geologists. The find is particularly significant. For the skeleton besides being surrounded by crude jewelry and stone implements, and buried with copper and bronze coins having undicipherable inscriptions. 8 Foot Skeleton

The mounds of the Ohio Valley have – know is that there were “giants in those days”. 8 Foot Skeleton

Out of all these facts some bewildering, some illuminating, one point seems to stand out: that the race has gone to the species of fittest brains. The great dinosaurs succumbed to the keen intelligence of the little possums. The powerful human giants disappeared and in their place rose men of less physical stature but with increasing brain power. (not likely)

In fact there is overwhelming evidence that man did indeed have brains as well as brawn. In fact these giants, human or otherwise were bigger better faster stronger and smarter than modern man. Modern man, i refer to as “weaker descendants.” There can be no mistaking that academia is wrong about anthropology in general there are no apemen, just superior apes and superior men. Greater Ancestors. 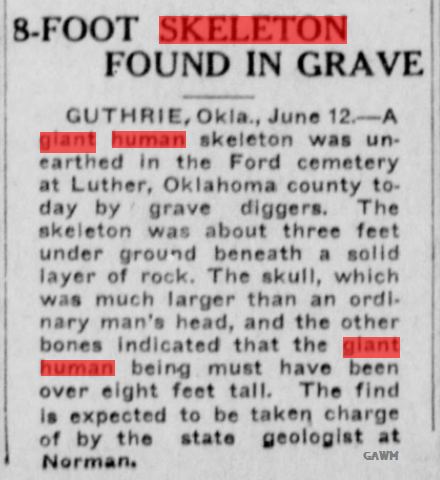 human skeleton was unearthed in the
Ford Cemetery at Luther, Oklahoma!
County, today by grave digpers. The
skeleton was about three feet under
pround beneath a solid layer of rock.
The skull, which was well preserved, !
was found to be about twice the size’
of an ordinary man’s head, and the
other bones indicated that the plant
human being must have been over
eiplit feet tall. The find is expected
to bet taken charge of by the state
geologist at Norman.