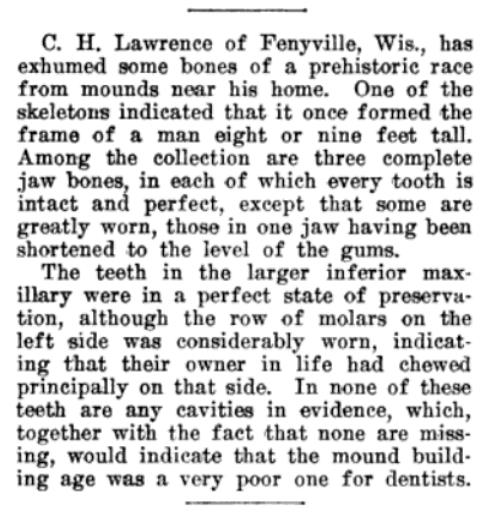 C. H. Lawrence of Fennyville, Wis., has exhumed some bones of a prehistoric race from mounds near his home. One of the skeletons indicated that it once formed the frame of a man eight or nine feet tall. Among the collection are three complete jaw bones, in each of which every tooth is intact and perfect, except some of the teeth are greatly worn, those in one jaw having been shortened to the level of the gums.

The teeth in the larger inferior maxillary were in a perfect state of preservation, although the row of molars on the left side was considerably worn, indicating that their owner in life had chewed principally on the side. In none of these teeth are any cavities in evidence, which, together with the fact that none are missing, would indicate that the mound building age was a very poor one for dentists.

Now this article focuses more on the teeth than the giant-size of the skeleton. So let me talk about the teeth for a moment. The worn teeth is probably a sign of cannibalism the eating of bones, as well as a diet of clams as is indicated by the shell mounds found all over America. The mound builders is not the same race as the Native Americans. The mound builders as facial features indicate were predominately white with reddish hair. The question is: Why are these finds being hidden?