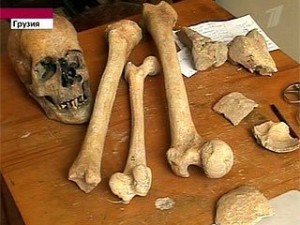 In 2008 the bones of an ancient giant man were unearthed near Borjomi, in Georgia (Caucasus) and reported in the news. This giant was estimated at 2,50 to 3 meters tall (About 9 to 10 feet) and had a skull about 3 times normal size.

The finding of giants in the Caucasus mountains is nothing new. A Four-meter human skeleton was found by two amateur archaeologist in Georgia near the village of Udabno in the summer of the year 2000, and skeletons of giants were also found at a cave near Gora Kazbek, Georgia in the 1920’s, not to mention the discoveries by Soviet scientists in the 1950’s.

On October 30, 1945 The Soviet News Agency TASS, and the WASHINGTON POST through UNITED PRESS, reported:

“The Skeleton of a giant, with a skull 33 inches around and a shin-bone 33 inches long, has been found in the Tien Mountains of Russian central Asia north of the Himalayas…”