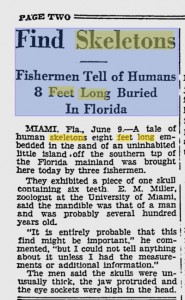 Miami, Florida., Jume 9, – tale of human skeletons eight feet long embedded in the sand of an uninhabited little island off of the southern tip of the Florida mainland was brought here today by three fishermen.

They exhibited a piece of one skull containing six teeth. E. M. Miller, zoologist at the University of Miami, said the mandible was that of a man and was probabably seven hunded years old.

‘It is entirely probable that this find might be important,” he commented, “but i could not tell anything about it unless i had the measurements or additional information.”

The men said the skulls were unusually thick, the jaw protruded and the eye sockets were high in the head.

June 9, 1936 issue of The New York Times: An article was published in Miami Florida that on an island off the coast of Florida, A zoologist excavated off a small uninhabited island, skeletons. These skeletons were embedded in the sand. E.M. Miller, Zoologist from the University of Miami claimed that the skulls were unusually thick and that the sockets of the eyes were high on the head. The jaws were large and they protruded forward. 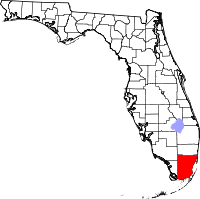 This would be a typical news story except that the skulls exhibited a greater robustness, and Adena-like long faces. The next unusual factor was that the skulls in question were eight feet long.

The whereabouts of these skeletons should still be documented.