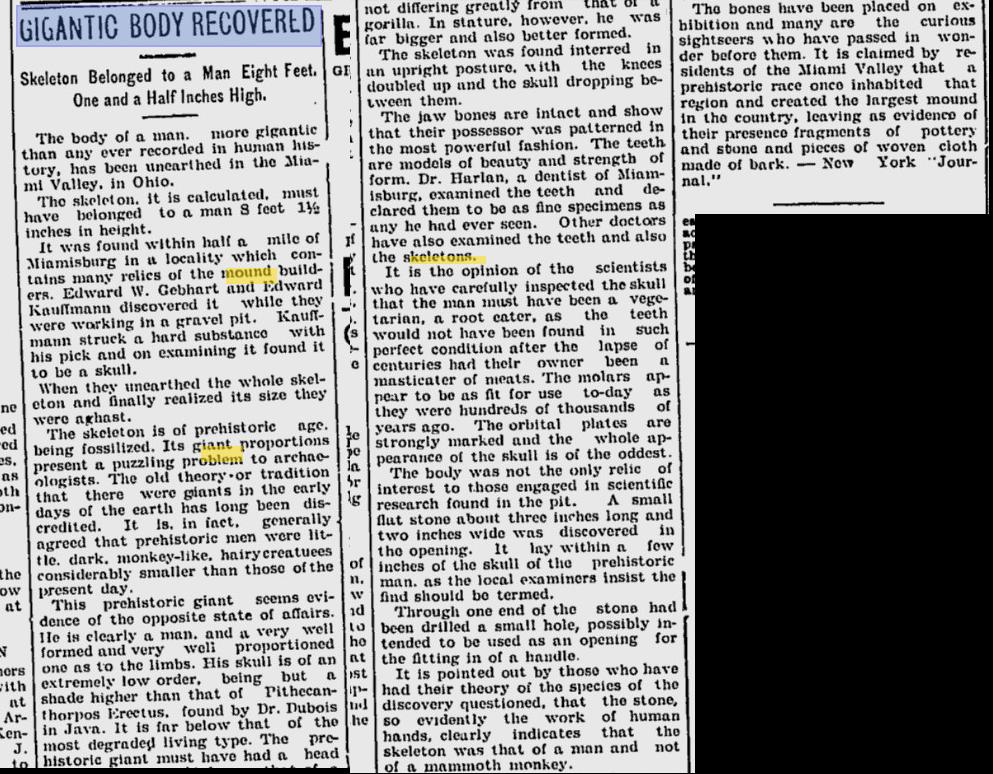 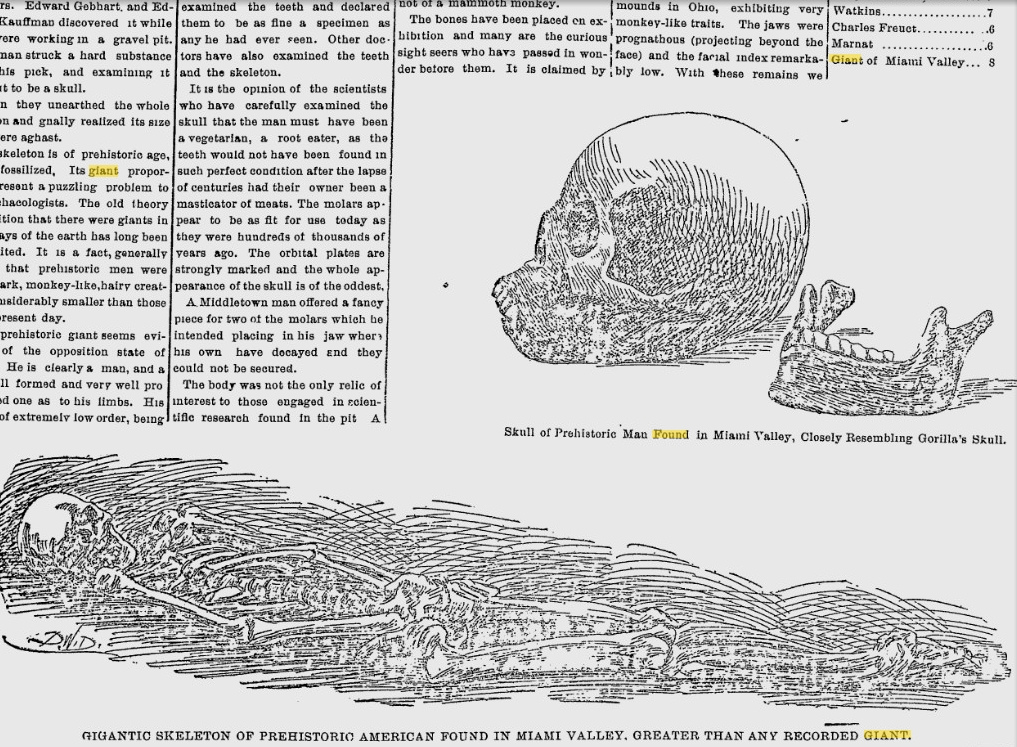 (Here is the drawing of the skeleton from Rephaim23)

Skeleton Belonged to a Man Eight Feet, One and a Half Inches High.

The body of a man. more gigantic than any ever recorded in human history, has been unearthed in the Miami Valley, in Ohio.

The skeleton, it is calculated,  must have belonged to a man eight feet 1 1/2 inches in height.

It was found within half a maile of Miamisburg in a locality which contains many relics of the mound-builders. Edward G. Gebhart and Edward Kauffmann discovered it, while they were working in a gravel pit. Kauffmann struck a hard substance with his pick and on examining it found it to be a skull.

When they unearthed the whole skeleton and finally realized its size they were aghast.

The skeleton was of prehistoric age. being fossilized. Its giant proportions present a puzzling problem to archaeologists. The old theory or tradition that there were giants in the early days of the earth has long been discredited. It is in fact and generally agreed that prehistoric men were little, dark, monkey-like, hairy creatures considerably smaller than those of the present day.

This prehistoric giant seems evidence of the opposite state of affairs. He is clearly a man and very well formed and very well proportioned one as to the limbs. His skull is of an extremely low order, being but that a shade higher than of Pithrocanthropus Erectus, found by Dr. Dubouis in Java, It is far below tha

t of the most degraded type. The prehistoric giant must have had a head not greatly differing greatly from that of a gorilla. In stature, however, he was far bigger and also better formed.

The skeleton was found interred in an upright posture, with the knees doubled up and the skull dropping between them.

The jaw bones are intact and show that the possessor was patterned in the most powerful fashion. The teeth are models of beauty and strength of form. Dr. Harlan, a dentist of Miamisburg, examined the teeth and declared them to be as fine specimens as any he had ever seen. Other doctors have also examined the teeth and also the skeletons.

It is the opinions of the scientists who have carefully inspected the skull that the man must have been a vegetarian, a root eater, as theteeth would not have been found in such perfect condition after the lapse of centuries had their owner been a masticator of meats. The molars appear to be as fit for use today as they were hundreds of thousands of years ago. The orbital plates are strongly marked and the whole appearance of the skull is of the oddest.

The body was not the only relic of interest to those engaged in scientific research found in the pit. A small flat stone about three inches long and two inches wide was discovered in the opening. It lay within a few inches of the skull of the prehistoric man, as the local examiners insist the find should be termed.

Through one end of the stone had been drilled a small hole, possibly intended to be used as a small opening

For the fitting end of a handle.

It is pointed out by those who have had their theory of the species of the discovery questioned, that the stone, so evidently the work of human hands, clearly indicates that the skeleton was that of a man and not a mammoth monkey.

The bones have been placed on exhibition and many are the curious sightseers who have passed in wonder before them. It is claimed by the residents of the Miami Valley that a prehistoric race once inhabited that region and created the largest mound in the country, leaving their evidence of their presence fragments of pottery and stone and pieces of woven cloth made of bark. New York “Journal”.

A Middletown man offered a fancy piece for two of the molars which he intended placing in his jaw where his own have decayed and they could not be secured.

The body was not the only relic of interest to those engaged in scientific research found in the pit A. . . .

Not of a mammoth monkey.

The bones have been placed on exhibition and many are the curious sightseers who have passed in wonder before them. It is claimed by . . . (missing text)

Mounds in Ohio, exhibiting very monkey-like traits. The jaws were prognathous (projecting beyond the face) and the facial index remarkably low. With these remains we . . . .