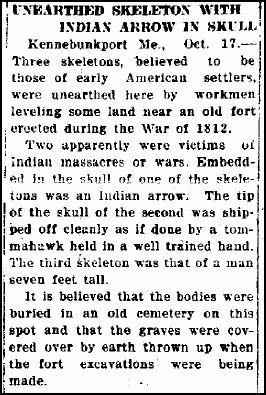 Kennebunkport Me., Oct. 17.-Three skeletons, believed to be those of early American settlers, were unearthed here by workmen leveling some land near an old fort erected during the war of 1912.

Two apparently were victims of Indian massacres or wars. Embedded in the skull of one of the skeletons was an Indian arrow. The tip of the skull of the second was shipped off cleanly as if done by a tomahawk held in a well trained hand. The third skeleton was that of a man 7 feet tall.

It is believed that the bodies were buried in an old cemetery on this spot and that the graves were covered over by earth thrown up when the fort excavations were being made.

There are more seven footers in burial mounds across the United States than there are in the NBA. There are thousands of articles of giants, or greater ancestors in news reports across America.

It can be demonstrated that in ancient times that people in the past are bigger better faster stronger and smarter in the past. These reports give clues like the place: Kennebunkport, like a location marker: an old fort. So research does not end with a newspaper article, it only begins with one. There is the site of an old fort in Kennebunkport Maine which may have more giants beneath its floors.