Scientists Unearth Relics of Indians Who lived 700 Years Ago.

Spesial to the New York Times.

BINGHAMPTON, July18. – Professor A. B. Skinner of the American Indian Museum, Professor W. K. Morehead of Phillips Andover Academy, and Dr. George Donahue, Pennsylvania State Historian, who have been conducting researches along the valley of the Susquhanna, have uncovered an Indian mound at Tioga Point, on the upper portion of Queen Earther’s Flats, on what is known as the Murray farm, a short distance from Sayre, Penn., which promises rich additions to Indian lore.

In the mound uncovered were found 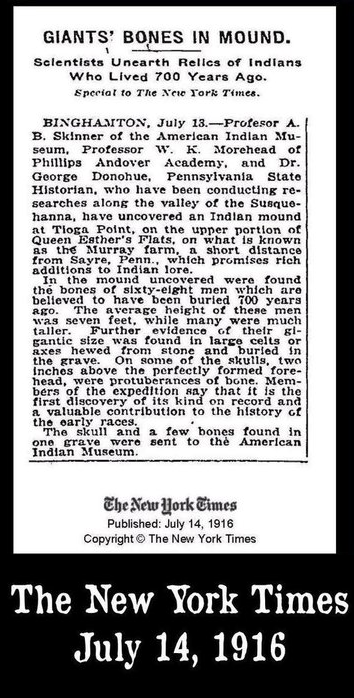 the bones of sixty-eight men which are believed to have been buried 700 years ago. The average height of these men was seven feet, while mant were much taller. Further evidence of their gigantic size were found in large celts or axes hewed from stone or buried in the grave. On some of the skulls, two inches above the perfectly formed forehead, were protuberances of bone. Members of the exhibition say that it is the first discovery of its kind on record and a valuable contribution to the historyof the early races.

The skull and a few bones found in one grave were sent to the American Indian Museum.