A seven foot skeleton (Stockton) was exhumed from native burial mound near Garwood Ferry Bridge. On September 24th in Stockton California three skeletons were excavated by Harry T. Sanford an archaeologist and his crew at the time they were believed to be the largest Indian Skeletons found in California.

These are the real natives, the one’s that existed before what we call “native Americans” their story like all native Americans when one culture comes in it wipes out the previous culture’s history. 7 feet individuals uncovered from the past testifies: like the animals have ancestors that are bigger, better, faster, stronger, and smarter, . . . so to the lesser descendants of people in the modern age. Skeleton Stockton. 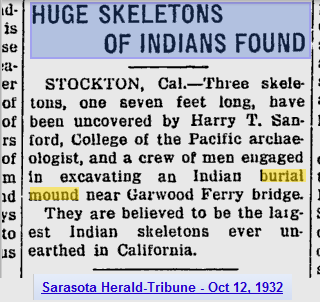