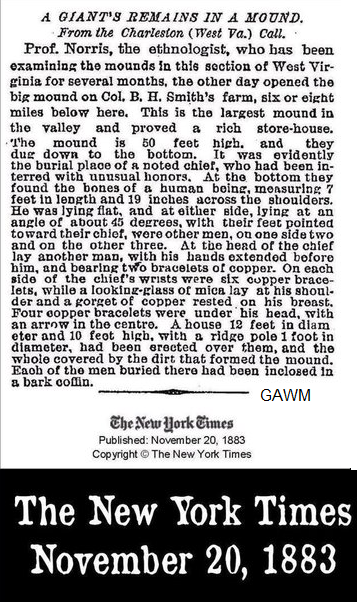 MAINS IN A MOUND

From the Charleston (West Va..) Call. Prof. Norris, the ethnologist, who has been examining the mounds in this section of West Virginia for several months, the other day opened the big mound on Col. B. H Smith’s farm, six or eight miles below here. This is the largest mound in the valley and proved a rich store-house. The mound is 50 feet high, and they dug down to the bottom. It was evidently the burial place of a noted chief, who had been interred with unusual honors. At the bottom they found the bones of a human being measuring 7 feet in length and 19 inches across the shoulders. He was lying flat, and at either side, lying at an angle of about of about 45 degrees, with their feet pointed toward their chief. were other men, on one side two and on the other three. Atthehead of the chief lay another man, with his hands extended before him, and bearing two bracelets of copper. On each side of the chief’s wrists were six copper bracelets, while a looking glass of mica lay at his shoulder and a gorget of copper rested on his breast. Four copper bracelets were under his head, with an arrow in the centre. A house 12 feet in diameter and 10 feet high, with a ridge pole 1 foot in diameter, had been erected over them, and the whole covered by the dirt that formed the mound. Each of the men buried there had been inclosed in a bark coffin.