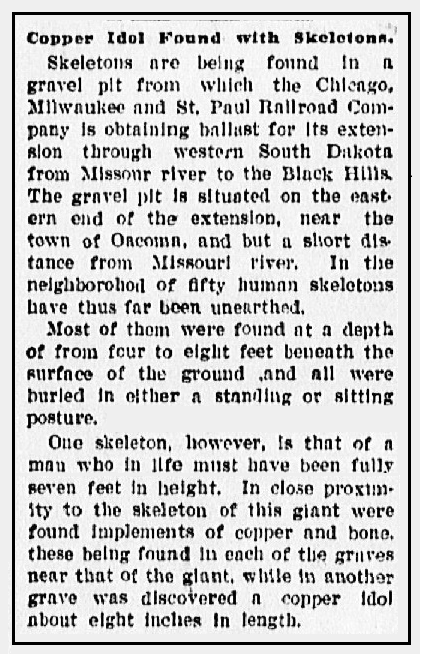 Skeletons are being found in a gravel oit from which the Chicago, Milwaukee and St. Paul Railroad Company is obtaining ballast for its extension through western South Dakota from Missouri river to the Black Hills. The gravel pit is situated on the eastern end of the extension, of (Oacoma?), and but a short distance from Missouri river. In the neighborhood of fifty human skeletons have been unearthed.

Most of them were found at a depth of from four to eight feet beneath the surface of the ground and all were buried in either a standing or sitting posture.

One skeleton however is that of a man who in life must have been fully seven feet in height, In close proximity to the skeleton of this giant were found implements of copper and bone, these beings found in each of the graves near that of the giant, while in another grave was discovered a copper idol about eight inches in length.