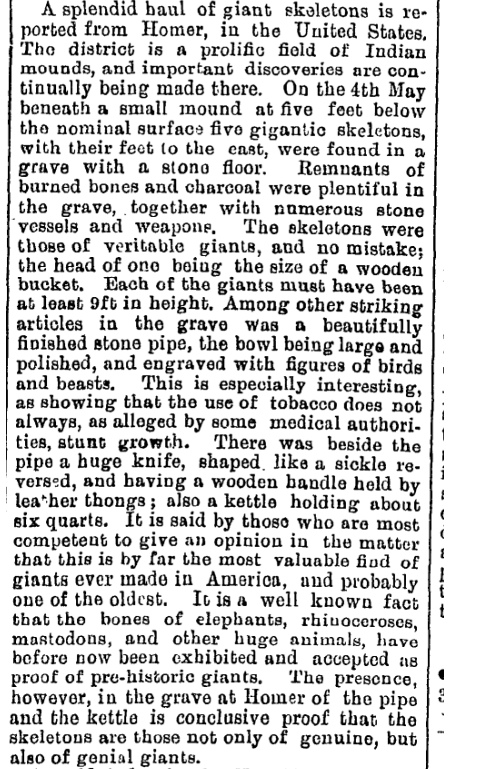 A splendid haul of giant sksletons is reported from Homer, in the United States. The district is a prolific field of Indian mounds, and important discoveries are continually being made there. On the 4th May beneath a small mound at five feet below the nominal surface five gigantic skeletons, with their feet to the east, were found in a grave with a stone floor. Remnants of burned bones and charcoal were plentiful in the grave, together with numerous stone vessels and weapons. The skeletons were those of veritable giants, and no mistake; the head of one being the size of a bucket Each of the giants must have been at least nine feet in height. Among other striking articles in the grave was a beautifully finished stone pipe, the bowl being large and polished, and engraved with figures of birds and beasts. This is especially interesting, as showing that the use of tobacco does not always, as alleged by some medical authorities, stunt growth. There was beside the pipe, a huge knife, shaped like a sickle, reversed and having a wooden handle held by leather thongs; also a kettle holding about six quarts. It is said by those who are the most competent to give an opinion in the matter that this is by far the most valuable find of any giants ever made in America, and probably one of the oldest. It is a well known fact that the bones of elephants, rhinoceros, mastadons, and other huge animals, have before now been exhibited and accepted as proof of pre-historic giants. The presence, however, in the grave at Homer of the pipe and the kettle is conclusive proof that the skeletons are those not only of genuine, but also of genial giants.

2) History of Licking County Ohio, Its past and present containing a . . . by Albert Adams Graham, 1881 pg 405 ‘a very large skeleton, . . . the jawbone would go over the face of the largest man present.

5) A tradition of Giants, Ross Hamilton