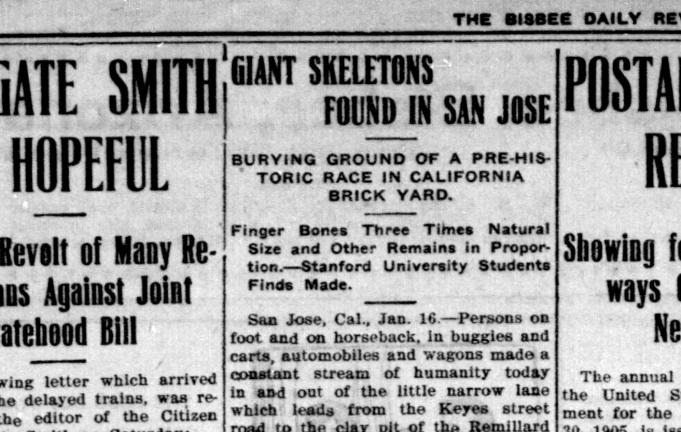 BURYING GROUND OF A PREHISTORIC RACE IN CALIFORNIA BRICKYARD.

FINGER BONES THREE TIMES NATURAL SIZE AND OTHER REMAINS IN PROPORTION. – Stanford University Students Finds Made. San Hose, Cal., Jan. 16. – Persons on foot and on horseback, in buggies and carts, automobiles and wagon made a constant stream of humanity today in and out of the little narrow lane which leads from the Keys street road in the clay pit of the Remillard.

The goal of the Greater Ancestors World Museum is to replicate these giants from the information that is given. In spite of the efforts to cover-up the numerous evidences and accounts for giants the museum would like to be the World’s leading research facility on Giants. On our home page we have a general donate button and a Gofundme account for two immediate displays that need to be finished. The lack of funds is the one thing that slows the work down and are seeking to give a better explanation for Origins than any group could. thank you.