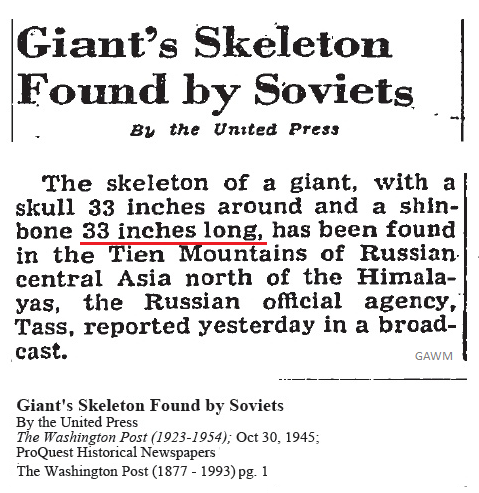 by the United Press legbone

The skeleton of a giant, with a skull 33 inches around and a shinbone 33 inches long, has been found in the Tien mountains of Russin central Asia north of the Himalays, the Russian official agency, Tass, reported yesterday in a broadcast. legbone

Rephaim23 or James Strouse is one of the primary researchers for GAWM. Also for Fritz Zimmerman, Jim Vieira, Ross Hamilton, and many others. In many of his blogs he talks about how the current ways to measure femur length to height.  Because, the Trotter and Glesser or Fordisc 2.0 method, breaks down the taller the individual. Like measurements even, with known giants would indicate a shorter stature. Therefore,  people like Robert Wadlow whose femur length 29.5 inches give estimates more than a foot off. Read more about the brilliant calculations of Rephaim23 here: