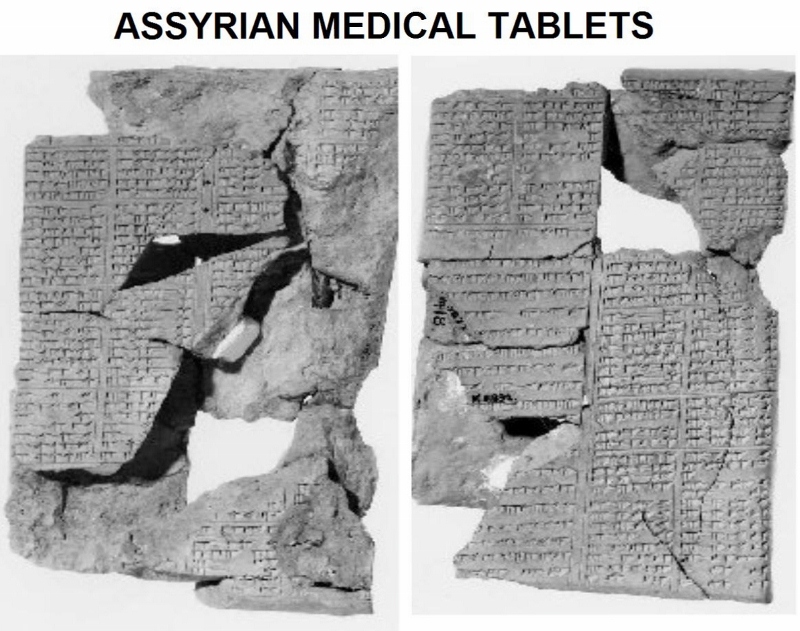 The workings of past Mesopotamian civilizations, such as the Assyrians and Babylonians, have also added to this important area but have gone relatively unnoticed. This article attempts to share with you a few of their accomplishments, of which some still continue today in various form.

Much like people today, citizens of ancient Assyrian cities like Nineveh sought doctors (called ashipu) for help in dealing with their ailments that stretched from migraines to cancer. Ashipus were mainly specialist who practiced in specific areas like pediatrics and gynecology. Regardless, they all followed a detailed process of diagnosing the disease then treating it with remedies delivered in various forms. Interestingly a comparison of the procedures and therapies used then to the ones today show a good deal of similarity. This means that some aspects of medicine have remained unchanged. Below are a few examples of such similarities and they’ve been categorized for your convenience.

Patient History Documentation
Assyrian medical texts discovered in modern-day Iraq and written in cuneiform (considered by some to be the first system of writing) show that ashipus kept detailed patient history records. Back then an ashipu would take scrupulous notes of patient symptoms and other important factors much like a physician does today. Although seemingly simple and unimportant, this transparent practice plays a critical part in the medical arena today. As many of us have witnessed, one of the first things a physician will look at is a patient’s medical history before moving to next steps.

Surgical Procedures and Sharing of Best Practices
Ancient medical tablets verify that ashipus delivered equivalently beneficial and rather advanced health care when compared to today’s treatments options. For example, there are multiple accounts of an ashipu surgically draining the pus that sometimes develops between the lungs and chest wall of pneumonia patients. During the procedure, the physician would use a knife to make a small opening in order to insert a tube to drain the pus. This process closely matches several present-day procedures.

Additionally, these medical tablets served as medical journals and were stored in ancient Assyrian libraries. In this way an ashipu could share best practices with peers. The importance of this practice is clearly evidenced in the sheer number of the medical journals that exist today.

Drug Discovery and Usage
Aspirin (active ingredient acetylsalicylic acid) was discovered in 1853 and a few years later started being used to treat headaches. It has since seen expanded use as a fever suppressor and preventative agent against strokes and heart attacks to name a few of its usages. It is arguably one of the greatest therapies discovered because of its expanded and continued use, not to mention that many of us have used it at some point in our lives. But you may be interested to know that a derivative of this important drug was actually used thousands of years earlier. Early records show that it was used as a treatment in ancient Assyria. For example, Ashipus crushed adaru-poplar seed (which contain salicylic acid, missing the acetyl group found in aspirin) to treat patients suffering from headaches. Amazing!!

These are but a few examples of the medical advancements ancient Assyrians made but still go relatively unnoticed. Having worked in the healthcare industry and knowing the various challenges involved,

I find what our ancestors did to be both fascinating and a tremendous source of pride. I feel it proves that ancient Assyria was truly an advanced civilization and one of the clear pioneers in the area of medicine and so should be recognized. And one of proofs of how advanced is that these contributions were made thousands of years and have stood the test of time.