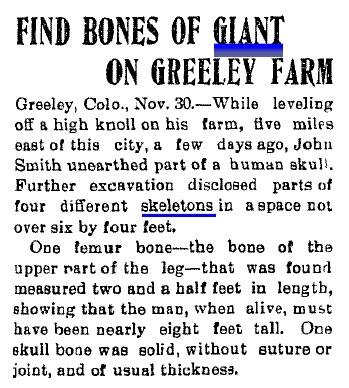 Greenley, Colo., Nov. 30.-While leveling off a high knoll on his farm, five miles east of this city, a few days ago, John Smith unearthed part of a human skull. Further excavation disclosed parts of four different skeletons in a space not over six by four feet. human femur

One femur bone-the bone of the upper part of the leg-that was found measured two and a half feet in length, showing that the man, when alive, must have been nearly eight feet tall. One skull bone was solid, without suture or joint, and of unusual thickness. human femur

It is a very big deal to find an eight foot skeleton from the past and it cannot be taken lightly. There are only three people in the world that are 8 foot tall, that’s three people out of the whole planet, of 7 billion people. So when academia is expecting to find 3.5 feet half apes, an instead we find eight footers. Although an eight footer is a great find, this femur is a 30 incher is very significant. Robert Wadlow whom, the guiness book of records as the tallest person that ever lived, his femur was 29.5 inches. Robert Wadlow was 8 foot 11 and a 1/4 which makes a person with a 30 inch femur 8 feet in height.