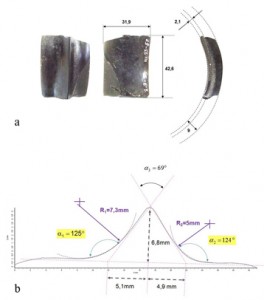 The obsidian bracelet from Aşıklı Höyük. a. Shape and dimensions, b. Symmetry of the object. Credit: Obsidian Use Project Archives. This image is available from the CNRS photo library, phototheque@cnrs-bellevue.fr

Researchers from the Institut Français d’Etudes Anatoliennes in Istanbul and the Laboratoire de Tribologie et de Dynamiques des Systèmes have analyzed the oldest obsidian bracelet ever identified, discovered in the 1990s at the site of Aşıklı Höyük, Turkey. Using high-tech methods developed by LTDS to study the bracelet’s surface and its micro-topographic features, the researchers have revealed the astounding technical expertise of craftsmen in the eighth millennium BC. Their skills were highly sophisticated for this period in late prehistory, and on a par with today’s polishing techniques. This work is published in the December 2011 issue of Journal of Archaeological Science, and sheds new light on Neolithic societies, which remain highly mysterious.

Dated to 7500 BC, the obsidian bracelet studied by the researchers is unique. It is the earliest evidence of obsidian working, which only reached its peak in the seventh and sixth millennia BC with the production of all kinds of ornamental objects, including mirrors and vessels. It has a complex shape and a remarkable central annular ridge, and is 10 cm in diameter and 3.3 cm wide. Discovered in 1995 at the exceptional site of Asıklı Höyük in Turkey and displayed ever since at the Aksaray Archeological Museum, the ring was studied in 2009, after Mihriban Özbasaran, Professor at the University of Istanbul’s Department of Prehistory, resumed excavations. 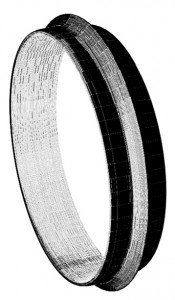 Digital reconstruction of the bracelet proposed by Mohamed Ben Tkaya (LTDS). Credit: Obsidian Use Project Archives. This image is available from the CNRS photo library, phototheque@cnrs-bellevue.fr

Laurence Astruc, a CNRS researcher and her colleagues analyzed the bracelet using extremely powerful computer technologies developed by LTDS researchers Hassan Zahouani (ENISE) and Roberto Vargiolu (ECL). Developed for industry in order to characterize the ‘orange peel effect’ on painted car bodywork, these methods, known as multi-scale tribological analysis, have been adapted for the study of micro-topographic features on archeological artefacts. They seek to identify every single operation performed on the surface of these objects.

This process has revealed that the bracelet was made using highly specialized manufacturing techniques. The analyses carried out showed that the bracelet was almost perfectly regular. The symmetry of the central annular ridge is extremely precise, to the nearest degree and nearest hundred micrometers. This suggests that the artisans of the time used models to control its shape when it was being made. The surface finish of the bracelet (which is very regular, resembling a mirror) required the use of complex polishing techniques capable of obtaining a nanometer-scale surface quality worthy of today’s telescope lenses.

Led by Laurence Astruc, the work was carried out in collaboration with the University of Istanbul and was funded by France’s National Research Agency as part of the ‘Obsidian: Practical Techniques and Uses in Anatolia’ program (ANR 08-Blanc-0318). In the program, the Asıklı Höyük bracelet is the first object to have been studied among some sixty other polished obsidian artefacts.

In collaboration with the University of Manchester and the British Museum, Laurence Astruc’s team is now analyzing ornamental objects found at the Halaf sites of Domuztepe in Eastern Central Anatolia and Arpachiyyah in Iraq.