These drill bits are huge! Each of them are specified for a different purpose, each catered to penetrate a different type of rock.

Some of the drill bits were used to drill salts, natural gas, and oil.

Each of these huge ground penetrating drill bits were used for mass industry of extracting these precious minerals.

It is unknown to me what was the production process of making these heavy metal tips, and what these tips were made from.

The drilling rigs from 2000 years ago still litter the landscape in China.

The rigs are reminiscent of oil fields of Texas,

Towering bamboo framework shoot one hundred and eighty feet in the air bamboo cables attach to these bits with a tensile strength of modern stainless steel.

The engineering giants are a sight to see, which is amazing when considering the dependance of energy we have on these materials.

Oil and natural gas is the life blood of our modern society, and its by product plastic has infinite applications.

There is a wide variety of stylized bits. This accumulative knowledge did not happen overnight.

There must have been centuries of on-hand extractions of minerals.

Even 2000 years ago, in a time when mainstream government academics portray as primative, it was a much perfected science.

Of coarse 2000 years ago does not represent the beginnings of oil drilling or the making of heavy metal bits, what it does represent is a perfected mature industry at a perceived early date throwing into question the idea of early man as primative. 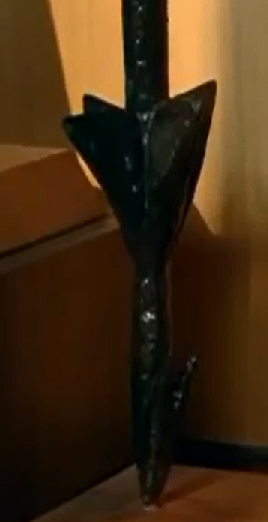 At first glance one might perceive these  pointed metal objects as arrows lances javalins etc.

These hard metal sculptures were meant for piercing rock.

It would be ice to find some pics with a scale ruler to have a size reference but that is not available in this instance.

The length, weight, how and what they were attached to is unknown as well.

We tend to think that efficient drills and/or drill bits is a recent product this is not the case these are 2000 years old possibly older.

At this time many of the “Ancient Aliens enthusiasts” are showing drill marks and are promoting the idea that sophisticated drills were used in ancient times and many of the naysayers are saying no drill bits were found.

The evidence for drilled holes all over the world are substantiated with evidence of drill bits for hard stone in China, and the abundance of evidence of a global trade market.

Approximately 5,000 years ago Chinese coastal people were boiling sea water to produce salt. As high density human settlement penetrated further and further inland and increasingly relied on farming, salt — critical to human survival as a vital food supplement and preservative — became a valuable commodity. The first recorded salt well in China was dug in Sichuan Province, around 2,250 years ago. This was the first time water well technology was applied successfully to the exploitation of salt and marked the beginning of Sichuan’s salt drilling industry. From that point on, wells in Sichuan have penetrated the earth to tap into brine aquifers, essentially ground water with a salinity of more than 50 g/l. The water is then evaporated using a heat source, leaving the salt behind.

wells were being drilled up to 459 ft (140 m) deep. Rural farmers in China still use this drilling technique for water wells today. The drill bit is made of iron, the pipe bamboo. The rig is constructed from bamboo; one or more men stands on a wooden plank lever, much like a seesaw, and this lifts up the drill stem about 3.3 ft (1 m) or so. The pipe is allowed to drop, and the drill bit crashes down into the rock, pulverizing it. Inch by inch.