200 seven to nine foot tall Skeletons Cayuga Canada – Greater Ancestors
We frequently hear of the discovery of the skeletons of a gigantic race, and we are therefore the more puzzled to know to what race the mound builders belonged, for although we are called a new country, comparatively speaking, we may be the oldest. A few years ago an article appeared in the Toronto Telegraph stating that in the township of Cayuga in the Grand River, on the farm of Daniel Fredenburg, five or six feet below the surface,
in a string of beads around the neck of each, stone pipes in the jaws of several of them, and many stone axes and skinners scattered around in the dirt.
The skeletons were gigantic, some of them measuring

Some of the thigh bones were six inches longer that any now known. The farm had been cultivated a century and was originally covered with a growth of pine. There was evidence from the crushed bones that a battled had been fought and these were some of the slain… Were these the remains of Indians or some other race? Who filled this ghastly pit?

Two hundred skeletons of ANAKIN [sic] in Cayuga Township; A singular discovery by a Torontonian and others —

A vast Golgotha opened to view — Some remains of the ‘Giants that were in those days.’

“On Wednesday last, Rev. Nathaniel Wardell, Messers. Orin Wardell (of Toronto), and Daniel Fredenburg, were digging on the farm of the latter gentleman, which is on the banks of the Grand River, in the township of Cayuga.

When they got to five or six feet below the surface, a strange sight met them. Piled in layers, one upon top of the other, some two hundred skeletons of human beings nearly perfect — around the neck of each one being a string of beads.

“There were also deposited in this pit a number of axes and skimmers made of stone. In the jaws of several of the skeletons were large stone pipes — one of which Mr. O. Wardell took with him to Toronto a day or two after this Golgotha was unearthed.”

These skeletons are those of men of gigantic stature, some of them measuring nine feet, very few of them being less than seven feet.

Some of the thigh bones were found to be at least a foot longer than those at present known, and one of the skulls being examined completely covered the head of an ordinary person.

These skeletons are supposed to belong to those of a race of people anterior to the Indians.

“Some three years ago, the bones of a mastodon were found embedded in the earth about six miles from this spot. The pit and its ghastly occupants are now open to the view of any who may wish to make a visit there.

“There is not the slightest doubt that the remains of a lost city are on this farm. At various times within the past years, the remains of mud houses with their chimneys had been found: and there are dozens of pits of a similar kind to that just unearthed, though much smaller, in the place which has been discovered before, though the fact has not been made public hitherto.

The remains of a blacksmith’s shop, containing two tons of charcoal and various implements, were turned up a few months ago.

“The farm, which consists of 150 acres, has been cultivated for nearly a century, and was covered with a thick growth of pine, so that it must have been ages ago since the remains were deposited there.

The skulls of the skeletons are of an enormous size and all manner of shapes, about half as large again as are now to be seen.

The teeth in most of them are still in almost perfect state of preservation, though they soon fall out when exposed to the air.

“It is supposed that there is gold or silver in large quantities to be found in the premises, as mineral rods have invariably, when tested, pointed to a certain spot and a few yards from where the last batch of skeletons was found directly under the apple tree.

Some large shells, supposed to have been used for holding water, which were also found in the pit, were almost petrified. There is no doubt that were a scheme of exploration carried on thoroughly the result would be highly interesting.

A good deal of excitement exists in the neighborhood, and many visitors call at the farm daily.

“The skulls and bones of the giants are fast disappearing, being taken away by curiosity hunters. It is the intention of Mr. Fredinburg to cover the pit up very soon. The pit is ghastly in the extreme. 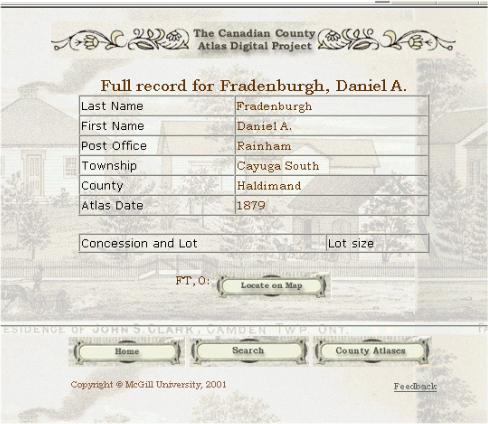 The farm is skirted on the north by the Grand River. The pit is close to the banks, but marks are there to show where the gold or silver treasure is supposed to be under.

From the appearance of the skulls, it would seem that their possessors died a violent death, as many of them were broken and dented.

“The axes are shaped like tomahawks, small, but keen, instruments. The beads are all of stone and of all sizes and shapes. The pipes are not unlike in shape the cutty pipe, and several of them are engraved with dogs’ heads. They have not lost their virtue for smoking.

Some people profess to believe that the locality of Fredinburg farm was formally an Indian burial place, but the enormous stature of the skeletons and the fact that pine trees of centuries growth covered the spot goes far to disprove this idea.Source:”Ancient American Volume 6, Issue 41, p. 9. Researched and submitted by Benoit Crevier. Originally published in The Daily Telegraph (Toronto, Ontario), Wednesday, August 23, 1871, page 1.

A township in the Niagara District; is bounded on the east by the township of Canboro; on the north-west by Seneca and Oneida; and on the south-west by Rainham and Walpole.

In Cayuga 14,871 acres are taken up, 3,666 of which are under cultivation. The Grand River flows through the township, on the banks of which are some good clearings.

About four miles below Cayuga village, is a bed of white gypsum, situated close to the river. The village of Indiana is situated on the river, about two miles above Cayuga, and about six miles below the same village is a small Episcopal church.