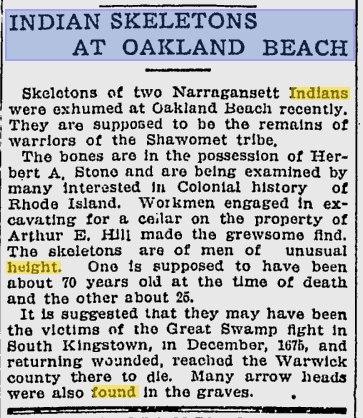 Skeletons of two Narragansett Indians were exhumed at Oakland Beach recently. They are supposed to be the remains of warriors of the Shawomet tribe. The bones are in the possession of Herbert A. Stone and are being examined by many interested in Colonial history of Rhode Island. One is supposed to have been about 70 years old at the time of death and the other about 25. 2 Men of Unusual Height

It is suggested that they may have been the victims of the Great Swam fight in South Kingstown, in December, 1675, and returning wounded, reached the Warwick county there to die. Many arrow heads were also found in the graves.

I would like to draw attention to the size of Rhode Island. Many people including myself thought, “surely California and Ohio will have references for Giants, but not Rhode Island. The search for giants s extensive, and nothing is more rewarding than finding evidence where many refuse to accept. I say this in respose, “If there is evidence for giants in Rhode Island, then there must be evidence in every landmass equal in size to Rhode Island.