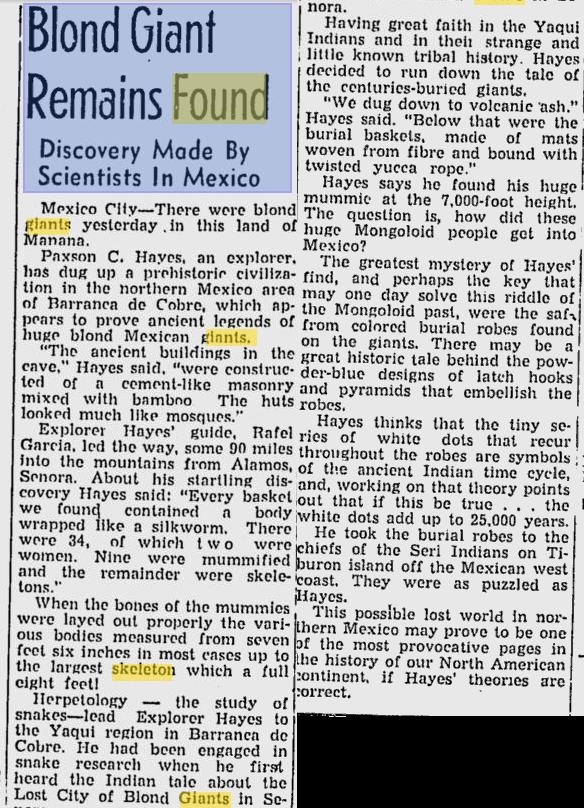 Blond Giant Remains found
Discovery made by scientists In Mexico
Mexico City – There were blond giants yesterday in this land of Mahanna.
Paxson C. Hayes, an explorer, has dug up a prehistoric civilization jn the Northern Mexico area of Barranca de Cobre, which appears to prove ancient legends of huge blond Mexican Giants.
“The ancient buildings  in the cave, ” Hayes said, “were constructed of a cement-like masonry mixed with bamboo the huts looked much like mosques.”
Explorer Hayes’ guide, Rafel Garcia, led the way, some 90 miles int the mountains from Alamos, Senora. About his stratling discovery Hayes said: “Every basket we found contained a body wrapped like a silkworm. There were 34, of which two were women. Nine were mummified and the remaider were skeletons.”
When the bones of the mummies were laid out properly the various bodies measured from 7 feet six inches in most cases up to the largest skeleton which a full eight feet!
Herpetology – the study of snakes-lead Explorer Hayes to the Yaqui region in Barranen de Cobre. He had been engaged in snake research when he first heard the Indian tale about the Lost City of Blonde Giants in Senora.
Having great faith in the Yaqui Indians and in their strange and little known tribal history. Hayes decided to run down the tale of the centuries-buried giants.
“We dug down to volcanic ash.” Hayes said. “Below that were the burial baskets, made of mats woven from fibre and bound with twisted yucca rope.”
Hayes said he found his huge mummie at the 7000-foot height. The question is , how did these huge Mongoloid people get into Mexico?
The greatest mystery of Hayes’ find, and perhaps the key that one day may solve this riddle of the Mongoloid past,  were the saf- from colored burial robes found on the giants.  There may be a great historical tale behind the powder-blue designs of latch hooks and pyramids that embellish the robes.
Hayes thinks that the tiny series of white dots that recur throughout the robes are symbols of the ancient Indian time cycle, and, working on that theory points out that if this be true . . . The white dots add up to 25,000 years.
He took the burial robes to the chiefs of the Seri Indians on Tiburon island off the Mexican west coast. They were as puzzled as Hayes.
This possible lost world in northern Mexico may prove to be one of the most provocative pages in the history of  our North American Continent, if Hayes theories are correct.

There are 34 individuals out of those 34 there were 9 mummies. There are 25 skeletons of which two were women. The mentioning of the size of the skeletons remaining is not mentioned.

Many giant mummies have been found throughout North and South America. Here we have an account of 9 giant mummies.