Giant Wombat, the size of a Rhinoceros: Diprotodon 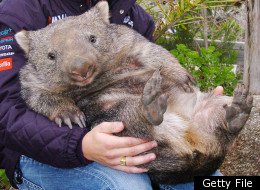 the giant wombat weighs around three tons and stretches up to 14 feet long.

Scientists in Australia have uncovered an ancient wombat the size of a rhinoceros, The Telegraph reports.

“It was the biggest of them all – the biggest marsupial that ever lived on any continent,” Professor Sue Hand, a paleontologist at the University of New South Wales, told Australian Geographic.

The plant-eating diprotodon, a relative (Greater Ancestor) of the modern wombat, roamed Australia. . . . The fossil of the car-sized creature found in Australia is the most complete skeleton of its kind, AFP reports. According to the Daily Mail, the giant wombat weighs around three tons and stretches up to 14 feet long.

The Telegraph has more on the area where the giant wombat was found:

The area, on the Leichhardt River between Normanton and Burketown,

has been a trove of giant creature fossils.

According to AFP, because the fossil is so well-preserved, it could shed important insight. . . . .  of the “mega-wombat” creatures.”