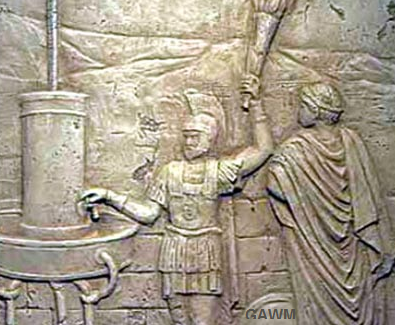 A look back at ancient civilizations can give us insight today into the very first methods of long-distance communications. In 350 BC, a Greek named Aeneas invented the hydraulic telegraph, which was a means of communicating important, fairly detailed information, quickly over long distances.

Aeneas was a Greek writer who focused on military history, strategy, communications. He was one of the first authors to provide a guide on military communications, which were important for ensuring that any society had the ability to anticipate possible invasions, and to communicate strategy and tactics back and forth between groups. Aeneas was frustrated by the limitations placed on communications via torches and beacons. Torches allowed some messages to be conveyed, for example, they could indicate danger, or communicate that an objective had been accomplished, but they could not send messages with any level of detail or description. Essentially, they could communicate that something had occurred, but there was no way to communicate what had occurred. Aeneas therefore developed the hydraulic telegraph in an attempt to overcome these obstacles. The telegraph involved a system of water-filled vessels containing rods that contained agreed-upon messages (such as “horsemen entering the country”, or “ships”). The two groups who wished to communicate would both have an identical set of supplies, and would be positioned far away from one another, but still within a line of sight, usually upon a hill. When one party wanted to send a message to the other, they would raise a torch. Upon seeing the torch raised, the second party would raise their torch to confirm they were prepared to receive the message. When the initial sender lowered his torch, both sides would simultaneously pull the plug from the bottom of the water-containing vessel. As the water drained, different messages on the rod would be revealed. When the intended message reached the top, the initial sender would again light his torch, signaling that the receiver should re-plug the vessel and read the message on the rod. For this to work properly, both parties had to have vessels of the same size, filled with the same volume of water, and rods containing the same messages. They also had to be very precise, starting and stopping drainage at the correct moment. A replica of the hydraulic telegraph of Aeneas. Credit: Augusta Stylianou

While the technology of the hydraulic telegraph seems very simple, its creation was marveled as a significant advancement in communication technology by allowing pre-determined messages to be sent long distances. In the event of an intrusion or an enemy approaching, they would only see the brief torch flashes, and would not be able to intercept the message in any way. This advancement in communication was also a great advancement in military communication and strategy.  Messages were sent from Sicily to Carthage during the First Punic War (264-241 BC) using the hydraulic telegraph, also known as a Semaphore line.

Through the hydraulic telegraph, the military now had the ability to communicate specific messages that allowed other groups of military personnel, as well as civilians, to better prepare for potential invasions by land or sea. This early form of long-distance communication was advanced for its time, and it paved the way for future forms of communications, which have led to the many methods we have available today.

The ”hydraulic telegraph” of Aeneas – Museum of Ancient Greek Technology. Available from: http://kotsanas.com/gb/exh.php?exhibit=1201002

The Hydraulic Telegraph – History of Information. Available from: http://www.historyofinformation.com/expanded.php?id=1612