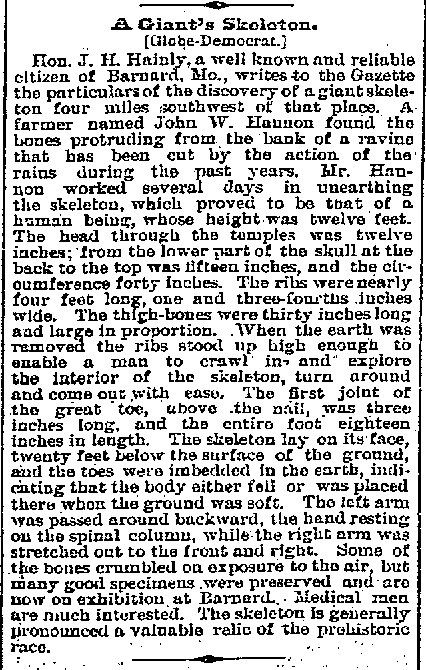 Democrat) 12′ skeleton Barnard
Hon. J. Hainly, a well known and reliable citizen of Barnard, Mo.. writes to the Gazette the particulars of the discovery of a giant skeleton four miles southwest of that place. A farmer named John W. Hannon worked several days in unearthing the skeleton, which proved to be that of a human being, whose height was twelve feet, The head through the temples was twelve inches; from the lower jaw of the skull at the back to the top was fifteen inches, and the circumference forty inches.  The ribs were nearly four feet long, one and three-fourths inches wide. 12′ skeleton Barnard.

The thigh bones were thirty inches long and large in proportion. When the earth was removed the ribs stood up high enough to enable a man to crawl in and explore the interior of the skeleton. turn around and come out with ease. The first joint of the great toe, above the nail was three inches long and the entire foot eighteen inches in length. The skeleton lay on its face, twenty feet below the surface of the ground, and the toes were imbedded in the earth, indicating that the body either fell or was placed there when the ground was soft. The left arm was passed around backward, The hand resting on the spinal column, while the right arm was stretched out to the front and right. Some of the bones crumbled on exposure to the air, but many good specimens were preserved and are now on exhibition at Barnard. Medical men are much interested. The skeleton is generally pronounced a valuable relic of the prehistoric past. 12′ skeleton Barnard.