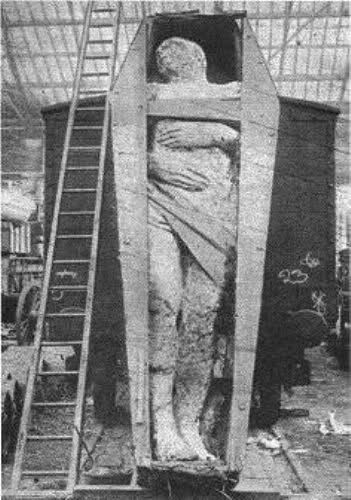 PETRIFIED GIANT.
RAILWAY COMPANY’S QUEER STORAGE.
(note: this article is from a document reader and has yet to be edited)
To storage of Irish giant, £200,” is an item which appears in the books of the L. and N.W. Railway at the Worship-street goods depot. The story is a peculiar one. Nearly 32 years ago a coffin-like receptable of stone arrived at the Broad -street goods depot, con- signed from Manchester. It contained the mortal remains of a petrified Irish giant, weigh- ing close 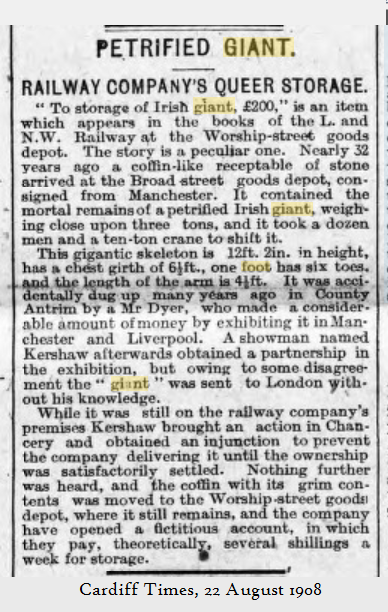 upon three tons, and it took a dozen men and a ten-ton crane to shift it. This gigantic skeleton is 12ft. 2in. in height, has a cbest girth of 6!ft., one foot has six toes. Mid the length of the arm is 41ft. It was acci- dentally dug up many years ago in County Antrim by a Mr Dyer, who made a consider- able amount of money by exhibiting it in Man- chester and Liverpool. A showman named Kershaw afterwards obtained a partnership in the exhibition, but owing to some disagree- ment the giant was sent to London with- out his knowledge. While it was still on the railway company’s premises Kershaw brought an action in Chan- cery and obtained an injunction to prevent the company delivering it until the ownership was satisfactorily settled. Nothing further was heard, and the coffin with its grim con- tents was moved to the Worship-street goodsi depot, where it still remains, and the company have opened a fictitious account, in which they pay, theoretically, several shillings a week for storage.
The photograph was published in Strand magazine in 1896
1) The Cardiff Times, 22 August 1908
2) Rhyl Record and Advertiser 21 December 1895