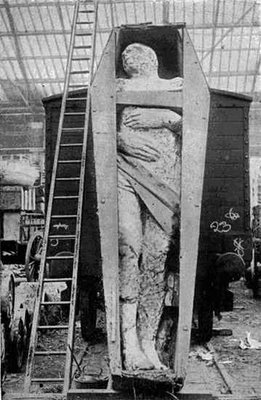 This photo of a ‘fossilized Irish giant’ was taken at a London rail depot, and appeared in the December 1895 issue of Strand Magazine. The giant was allegedly dug up by a Mr Dyer while prospecting for iron ore in County Antrim (Ireland).

It was 12 ft 2 in (3.71 m) tall, weighed 2 tonnes, and had 6 toes on its right foot. After being exhibited in Dublin, it was brought to England and exhibited in Liverpool and Manchester at sixpence a head, ‘attracting scientific men as well as gaping sightseers’. After a legal dispute over ownership, nothing more appears to have been heard or seen of the exhibit.

An article from Strand magazine (December,1895) reprinted in “Traces of the Elder Faiths of Ireland” by W.G. Wood-Martin mentions this fossilized giant discovered during mining operations in County Antrim, Ireland: “Pre-eminent among the most extraordinary articles ever held by a railway company is the fossilized Irish giant, which is at this moment lying at the London and North-Western Railway Company’s Broad street goods depot, and a photograph of which is reproduced here. . . This monstrous figure is reputed to have been dug up by a Mr. Dyer whilst prospecting for iron ore in County Antrim. The principal measurements are: entire length, 12ft. 2in.; girth of chest, 6ft. 6in.; and length of arms, 4ft. 6in. There are six toes on the right foot. The gross weight is 2 tons 15cwt.; so that it took half a dozen men and a powerful crane to place this article of lost property in position for the Strand magazine artist. Dyer, after showing the giant in Dublin, came to England with his queer find and exhibited it in Liverpool and Manchester at sixpence, sixpence a head, attracting scientific men as well as gaping sightseers”. 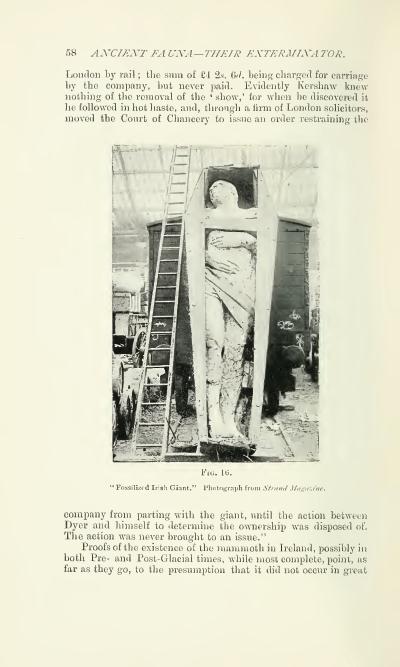