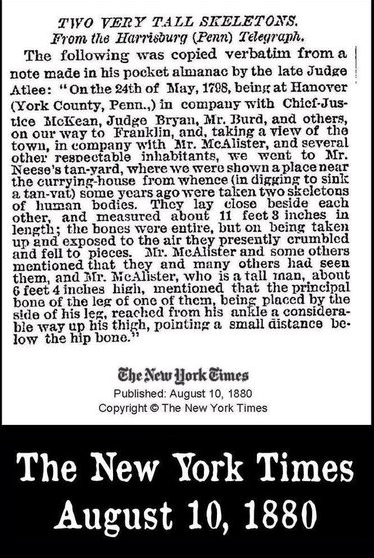 The following was copied verbatim from a note made in his pocket almanac by the late Judge Atlee: On the 24th om May, 1708, being at Hanover (York County, Penn.) in company with Chief-Justice Mckean, Judge Bryan, mr Burd, and others, on our way to Franklyn, and taking the view of the town in company with Mr. McAlister, and several other reasonable inhabitants, we went to Mr. Neese’s tan-yard, where we were shown a place near the currying-house from whence (In digging to sink a tan-vat) some years ago were taken two skeletons of human bodies. They lay close beside each other, and measured about 11 ft 3 inches in length; the bones were entire, but on being taken up and exposed to the air they presently crumbled and fell to pieces. Mr. McAllister and some others had seen them, and MR. McAllister, who is a tall man, about 6 feet 4 inches high, mentioned that the principle bone of the leg of one of them, being placed by the side of the leg, reached from his ankle considerable way up his thigh, pointing a small distance below the hip bone.”