Further investigation of the Sweeney mounds, near Carthage, Ill., resulted in the unearthing of hundreds of human skeletons of giant proportions. 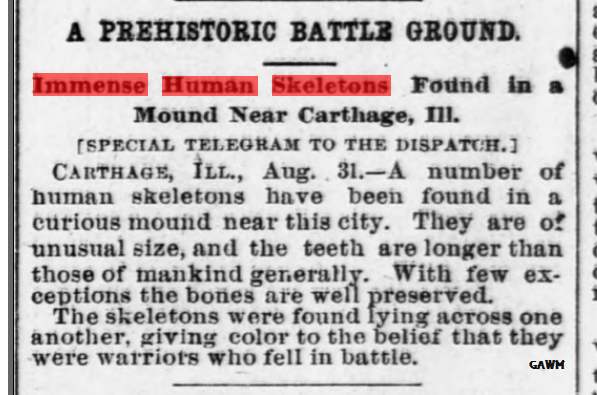 Immense Human Skeleton Found in a Mound near Carthage, Ill.
[Special Telegram to the Dispatch]
CARTHAGE, ILL., Aug. 31.- A number of human skeletons have been found in a curious mound near this city. They are of unusual size, and the teeth were longer than those of mankind generally. With few exceptions the bones are well preserved. The skeletons were found lying across one another, giving color to the belief that they were warriors who fell in battle.
Pittsburg Dispatch. (Pittsburg [Pa.]). 01 Sept. 1891. Chronicling America: Historic American Newspapers. Lib. of Congress <http://chroniclingamerica.loc.gov/lccn/sn84024546/1891-09-01/ed-1/seq-4/>
The next step would be to find out exactly how many of these

skeletons were found from this mound. The text says that there were 100’s of giants found. That would make this a large race of giants. Words like “immense” and “Unusual size” “the teeth and “giant proportions” and “are longer than mankind generally” are three ways that the writer communicates that these were giants.
Illinois is a hotbed of giants it is in the Ohio-cascade where the flowering population of giants radiates outward in great numbers. Illinois and Florida is in close running as giants are found consistently near islands and penninsular waterways. Illinois is one of the states that may just end up being completely filled in with every county having at least one example of giants or giant evidences. This cannot be done without local “field agents” and giant hunters doing research in local museums and local archives in each county.

The conclusion to the prospect of hundreds of giants in the past is that smaller people continually replace taller people. that mankind is shrinking, that all of the animal kingdom. each are shrinking in size. As we look into out past we see our greater ancestors who are bigger, better, faster, stronger and smarter in the past. Extinction is a farce, its just a way of garbage canning evidence to promote academic anomalies. Tall or large never means extinct, it means mature / extant.
Chris L Lesley / Greater Ancestors World Museum