Prehistoric Being Unearthed by Blast

Dynamite Throws up a Tree and With It a Stone Giant. 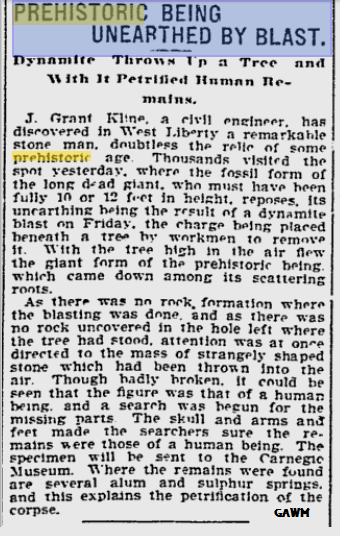 J. Grant Kline, a civil engineer, has discovered in West Liberty a remarkable stone man. doubtless the relic of some prehistoric age. Thousands visited the spot yesterday, where the fossil form of a long dead giant, who must have been fully 10 or 12 feet in height, reposes, its unearthing being the result of a dynamite blast on Friday, the charge being placed beneath a tree by workmen to remove it. With the tree high in the air flew the giant form of a prehistoric being, which came down among its scattering roots. stone giant

As there was no rock formation where the blasting was done and as there was no rock uncovered in the whole left where the tree had stood, attention was at once directed to the mass of strangely shaped stone which had been thrown into the air. Though hardly broken, it could be seen that the figure was that of a human being, and a search was begun for the missing parts. The skull and arms and feet made the searchers sure that the remains were those of a human being.

The specimen will be sent to the Carnagie Museum. Where the remains were found are several alum and sulphur springs and this explains the petrification of the corpse. stone giant

Here is an account that the Stone Giant was received by the Carnegie Museum. So is the Journal conspiring and deceiving the public to sell papers risking a lawsuit from one of the most powerful institutions in the world. Did this small paper print lies riking a legal battle with the Carnegie team of lawyers, . . . not likely. If it were so why didnt the Carnegie Museum pursue? Why does this paper still exist?

Of course the more plausible explanation is that the Carnegie foundation received this giant. The Carnegie kept the find on the hush hush and it went into the Carnegie’s own private collection. Much like the Smithsonian the rich and powerful collect rare specimen’s and hide them away.