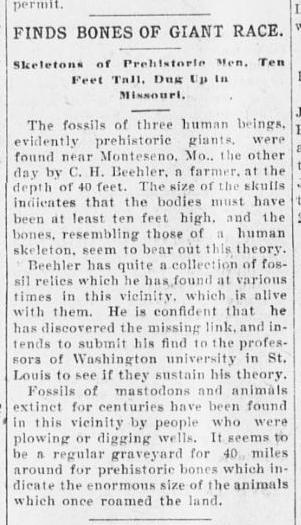 Indications of a 10 footer

The fossils of three human beings, evidently prehistoric giants, were found near Monteseno, Mo., the other day by C. H. Beehler, a farmer, at the depth of 40 feet. The size of the skulls indicates that the bodies must have been at least 10 feet high, and the bones, resembling those of a human skeleton, seem to bear out this theory. 10 footer.

Beehler has quite a collection of fossil relics which he has found at various times in the vicinity, which is alive with them. He is confident that he has discovered the missing link, and intends to submit his finds to the professors of Washington University in Saint Louis to see if they sustain his theory. Fossils of Mastadons and animals extinct for centuries have been found in this vicinity by people who were plowing or digging wells. It seems to be a regular graveyard for 40 miles around for prehistoric bones which indicate the enormous size of the animals that once roamed the land.